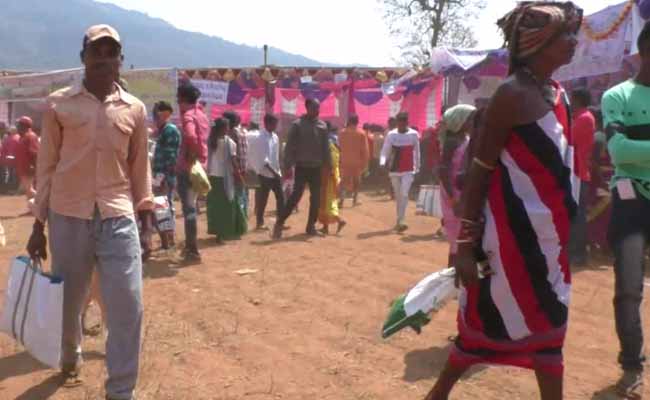 Malkangiri: Amid series of confrontation between Maoists and the tribals in the Maoist-infested Malkangiri in last few weeks which seems to be exposing the weakening of the left wing extremism’s stronghold in the region, the district authorities have now adopted a new formula to usher in more development in the region.

Maha Samadhan camp is a new people’s outreach initiative taken by the Malkangiri administration to provide the public a better platform to show their grievances.

During a first-such public hearing, people of the region especially in Chitrakonda, the Swabhiman Anchal came out in huge numbers to voice their complaints on issues like construction of roadways, healthcare, supply of drinking water, housing schemes.

The district authorities have assured to take up the issues in concerned forum for their quick remedy in future.

Malkangiri Collector Manish Agarwal informed the media that this is the first such mega grievance redressal programme in the district. Earlier in October 2019, a mega service delivery camp was organized in the region.

“We have listened to the issues of people mainly drinking water which will be expedited as a priority for people’s welfare. We hope that in coming days we will organise many such programmes keeping in view security and other issues so that people here can easily return to the mainstream of the society after getting doorstep delivery services,” Agarwal said.

Elaborating on developmental works undertaken in the cut-off region, the collector said 6 new ANM sub centres will soon be rolled out for better healthcare of the public.  Biju health express is also helping the local people in getting specialist healthcare treatment in district HQs hospital.

Malkangiri SP Rishikesh Khilari said police are also dedicated to make sure that policing reaches every door step in the region so that the threat of LWE that has been deterring public from joining the mainstream can be crushed.

Locals have also expressed optimism that the new initiative by the government will help them take part in developmental activities in the area and also thwart any kind of Maoist threat.

Trader ‘Robbed Of’ Rs 44K Inside Mo Bus In Bhubaneswar