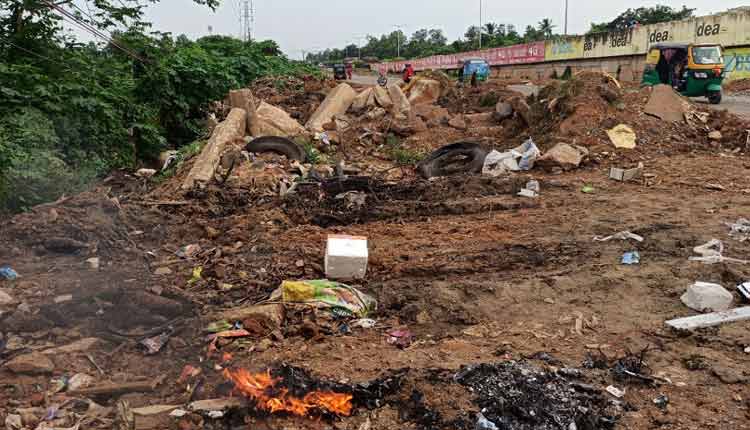 Bhubaneswar: Ever since the city managed to find a smart city tag, the Bhubaneswar Municipal Corporation (BMC) is spending crores of rupees towards the beautification of the town. But, when it comes to waste management, there are many loopholes.

What affects the denizens of the town most is the illegal dumping yards, which not only make the environment unhealthy but also sullies the face of the city.

Travelling from Baramunda towards Khandagiri square on National Highway 16, what disturbs commuters most is the illegal dump yard and the stink emanating from it.

While, the BMC is carrying out a massive city beautification and sanitation project by installing dustbins in public places, but it hardly bothers about where exactly the waste goes.

Baramunda has become a giant hub for all kinds of waste — from dry, wet and organic to carcasses of animals. The illegal dump yard is just a kilometre away from Khandagiri and Udayagiri caves that attract hundreds of tourists every day.

Worse, despite a National Green Tribunal (NGT) ban, the dump yard is set on fire every day. What is more disturbing and dangerous is an Indian Oil petrol pump is just 100 metres from the garbage hill. Open burning of solid waste and piles of polythene releases dioxin, furan, carbon monoxide and dioxide into the air, endangering the life in the area.

Environmentalist Jaya Krushna Panigrahi said, “May that be Baramunda or beside Sainik School, illegal dumping has been increasing. The most disturbing thing is Odisha has no scientific disposal of waste. There is no waste processing and final disposal that includes source segregation which then goes for composting. Dumping waste can cause even bigger problems in the environment.”

Pinaki Swain, a Baramunda local said, “Dumping animal carcasses in the open is too much. They are left to rot here and the place stinks so much that one needs to cover the face or hold the breath if he/she wants to cross the area. This place has been an illegal dump yard for years now. Despite repeated complaints, the BMC has failed to take this matter seriously.”