The State Health Department seems little worried over low turnout at vaccination sites because, the lower the recipients, the higher will be the wastage of the vaccines in Odisha 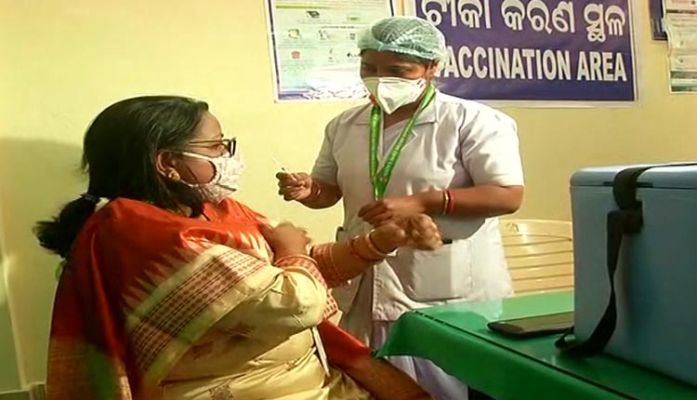 Bhubaneswar: After an over the top performance in Covid-19 vaccination on Day 2 in Odisha, the Day-3 has seemingly hit the inertia wall today. The achievement rate of vaccination in the State has been recorded at around 88 per cent vis-à-vis 102 per cent on Day 2.

Moreover, in comparison to around 17 districts achieving 100 or more score on Day-2, the count of the districts slipped to 13 on Day-3.

As per the final vaccination report on Day-3, a total of 14,291 health care workers, including ANMs, have taken the shot in their arms today. However, the State Health Department had targeted to immunise around 16,261 beneficiaries. The State health department had planned 192 sessions today.

While as many as 13 districts in the State has today recorded an achievement rate of 100 per cent or more, big players like Bhubaneswar and Cuttack proved the laggard ones today.

The Other districts that scored 100 or more are: Balasore, Bhadrak, Jagatsinghpur, Jajpur, Jharsuguda, Kendrapada, Malkangiri, Mayurbhanj and Sonepur.

However, the Capital city had reported only 69 per cent vaccination rate, and the rate in neighbouring Cuttack district stood at 78 per cent.

“Though some still have apprehensions in their mind, this is not a major player behind the dip in the rate today. It was learnt that some personal reason were behind the fall in full immunisation rate,” explained State Vaccine nodal officer, Bijay Kumar Mishra.

However, sources in Capital Hospital informed that the dip in Bhubaneswar has been attributed to the procedural hassles involved in Covaxin vaccination.

“Many seem wary about filling the consent form. Also, the additional medical check-ups like blood pressure, submission of their medical history et al are proving barriers for accomplishing a higher vaccination rate,” said a vaccination officer in the Capital Hospital.

IS LOW RATE A WORRY?

The State Health Department seems little worried over low turnout at vaccination sites because, the lower the recipients, the higher will be the wastage of the vaccines.

As per top health department sources, while the wastage on Day 2 had been around 5 per cent from the limit of 10 per cent set for the Covid -19 vaccines by the Central Government. The wastage, however, had not been uniform. The rate is higher in few districts.

The wastage in Bhubaneswar today had been more than 10 per cent, as the turnout rate has been mere 69 per cent.

“Each vial either contains 10 or 20 doses. Since Covid Vaccination does not follow open vial policy – means if a vial is opened, the doses need to be given to the targeted recipients during the 8-hour period. Failing to do so will lead to wastage of the vaccines,” explained Mishra.