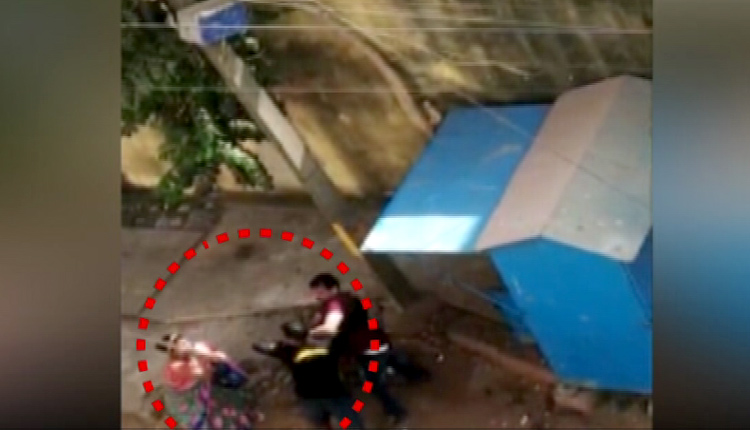 Bhubaneswar: A couple allegedly abused and brutally thrashed a customer after the latter claimed the gold chain he bought from their jewellery showroom was of substandard quality. The incident occurred at Khandagiri Bari under Bharatpur Police limits on the outskirts of Bhubaneswar on January 7.

Based on the written complaint by the customer identified as Bibekananda Mohanty, a resident of Khandagiri Bari area, Bharatpur Police swung into action and arrested one Asit Senapati, the owner of the jewellery shop.

However, Senapati’s wife, who is yet to be identified has not been arrested, said sources.

Meanwhile, the entire episode, caught on a mobile phone camera, has gone viral on several social media platforms today. The footage purportedly shows the shopkeeper along with his wife abusing and thrashing Mohanty in the middle of the road.

As per the complainant, Mohanty had purchased a gold chain for Rs 9,400 four years back. Due to some financial issue few months back, when Mohanty went to the bank to mortgage the gold chain, the bank refused him loan citing inferior quality of the jewellery.

Later, Mohanty approached Senapati complaining about the substandard quality of gold following which the latter after a minor argument, exchanged the gold chain and asked him not to reveal the matter to anyone.

It is also being alleged that Senapati had earlier cheated around 12 of his customers, who were also known to Mohanty. In order to prevent others from falling prey to Senapati, Mohanty kept sharing the incident to his neighbours.

On January 7, Senapati and his wife attacked Mohanty, while he was standing near the shop, leaving serious injuries on his head.