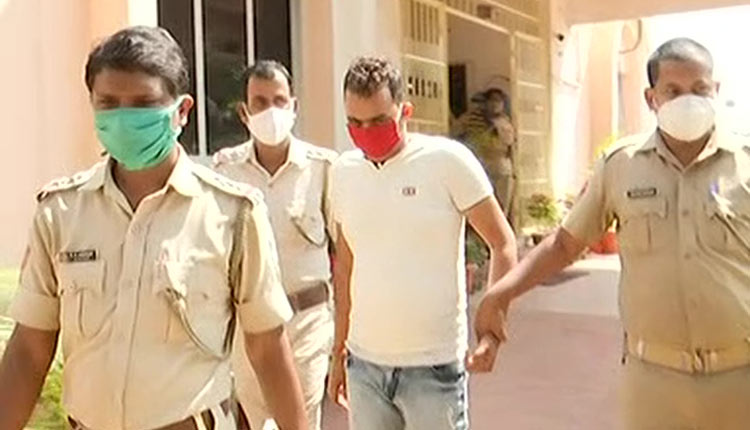 Bhubaneswar: The Commissionerate Police has busted a major recruitment racket being run by a couple in Dhauli area on the outskirts of Bhubaneswar.

Saroj Kumar Jena (29) and his wife Rashmilata Mohanty duped several gullible youths of lakhs of rupees by promising them jobs in police, railway and other departments. While Jena was arrested today, his wife is on the run.

Sayaranjan Jena, a job seeker who lost lakhs of rupees with a hope of a railway job, said he fell in the trap after coming across a fake recruitment advertisement put up by the accused on online marketplace OLX.

“When I contact him, Saroj asked me to visit his office-cum-home. As I reached there, some youths who were present there told me that they got appointments and now working in various departments. Saroj’s wife also claimed that she works in the railways,” the complainant said.

“After I made payment for a Group C job in railway, he took me to Kolkata and promised that I will join services within 3 days after completion of all the procedures. After undergoing medical test, I was given the joining letter. However, after seeking the letter, I raised doubts. But I had no option, because he has already taken Rs 7 lakh from me by the time. The accused has also set up a fake training centre, 60 KM away from Howrah,” Sayaranjan told media.

The complainant also said the accused later assured him to engage him at Khurda Road Railway Station. “When I suspected, he asked me to return to Bhubaneswar and assured to engage me in Khordha and took Rs 3 lakh again. But after going through the same procedures here, he again started avoiding me,” the complainant added.

Bijay Kumar Pradhan of Dhenkanal district, who also fell prey to the job fraud said, “The accused demanded Rs 3 lakh for providing me a sub-inspector (SI) job. As they failed to provide the job, I took them to Raikia police station. However, he assured to return the amount by February 14.

Speaking about the fraud, Bhubaneswar DCP Umashankar Dash said, “One victim had submitted complaint on February 14 that Saroj duped him of Rs 30,000 on the promise of a job. During the investigation, it was learnt that the accused and his wife duped other job seekers too. The accused has been arrested and forwarded to court. Today another complainant lodged complaint that he was duped of around Rs 7.30 lakh.”

Dash said the accused duped many job seekers by promising them jobs in railway, IRCTC, police, army and security agency. “We are planning to take him on remand,” he said.

“We are hopeful that those who have been duped by the accused will lodge complaint at Dhauli police station and we will conduct probe accordingly,” the DCP added.

Assembly Elections: 824 Constituencies In 5 States To Go For Polls From Mar 27, Results On May 2