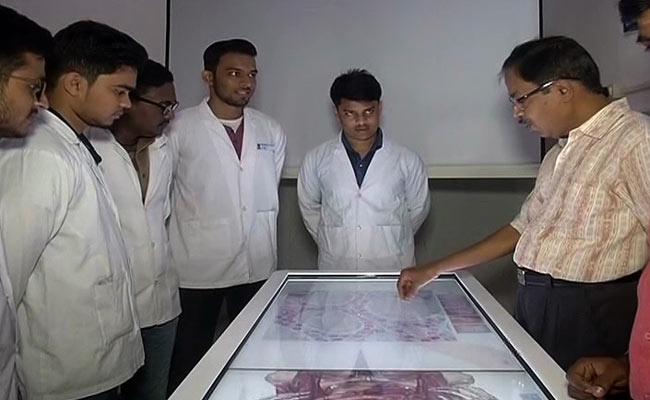 Cuttack: Sans required number of donated human bodies, MBBS students of SCB Medical College and Hospital here are facing hardship during their Anatomy classes and medical research. As per the Medical Council of India (MCI) guidelines, only eight students are allowed to have anatomy dissection class by using one dead body. However, in SCB, there are only eight bodies (five men & three women) for 250 medical students of the government college, which means one body is used by at least 30 students for anatomy.

With such a situation prevailing for the last few months, the medicos have alleged that they are deprived of getting better anatomy classes. “If more than 20 students stand around one body, those standing at the front row only can understand the lesson well. The human anatomy dissection class is held for around two hours and it is getting very difficult for us to grasp things within this short period of time,” said Biswajit Sahu, president of SCB students’ union.

Sources said the 3-D dissection table also has other facilities like magnetic resonance imaging (MRI), computed tomography (CT) scan and microscopic views. Students of surgery, neurosurgery and cardiovascular surgery will also get benefits from this table.

SCB Medical College Dean Jayashree Mohanty said, “Maintaining the cadaver is a long and difficult process which includes dissection and putrefaction. The 3-D dissection table, on the other hand, is very helpful for the students which they can operate easily.”

On the other hand, students of Anatomy department opined that the natural learning experience is missing when bodies are replaced by a 3-D dissection table. “Cadaver can’t be replaced. In future, we will have to conduct surgery on a body and conducting surgery on a body is different than seeing something that is virtual,” said Amrita Nalini Manabikata, a student of Anatomy department.

Anyone can donate his/her body after death for medical research. Besides, the State Assembly had passed the Odisha Anatomy (Amendment) Act in 2013.

However, with no or very less donors, intellectuals have said that there is a necessity to create awareness among people which might inspire them to pledge their bodies and organs for donation after death. “We urge the State government to encourage people so that they can donate their bodies which will help the medical students in their research and they can become good doctors,” said Odisha Jana Jagaran Mancha, President, Choudhary Prabhat Keshari Mishra.

Column: Not Much Has Changed In Shiva’s City