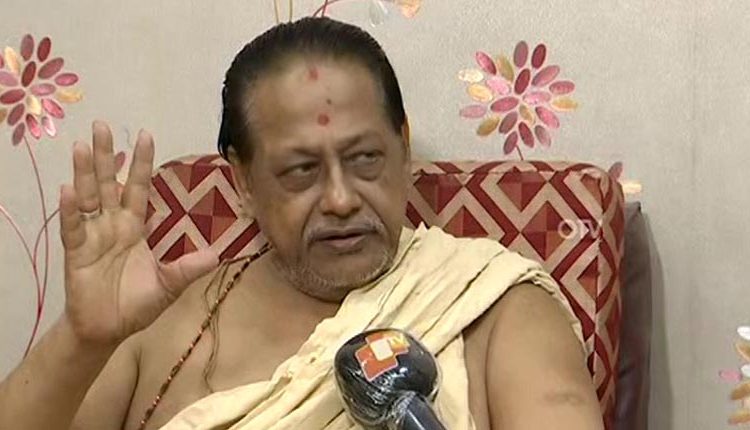 Puri: We have tremendous faith on Lord Jagannath that Rath Yatra will be organised, said Badagrahi on Lord Balabhadra, Haldar Das Mohapatra on Thursday.

According to Haldar Das Mohapatra, the Holy Trinity will be seated atop their respective chariots which clearly imply that Rath Yatra will be organised as per tradition.

COVID-19 social distancing norms will be followed as per Lord Jagannath’s rules and tradition, he added.

“Social distancing norms could not be followed while agyamala was being brought during the ‘Ratha Dera’ ritual. However, the traditional ritual was duly observed. Rath Yatra will be organised as per Lord Jagannath’s wish and tradition,” said Haldar Das Mohapatra.

As per the decision, ceremonial Pahandi (procession) of the Lord Jagannath, Lord Balabhadra and Devi Subhadra will be held between 1 AM and 4 AM while the Snana (bathing) rituals will be performed between 7.30 AM and 9.30 AM on June 5.

Chhera Panhara, a ritual of sweeping the altar on which the deities are seated will be conducted at 10.30 AM. Similarly, Hati Besha will be held between 11 AM and 12 PM and Bahuda (return) Pahandi will be organised between 5 PM and 8 PM.

According to servitors, similar ritual timings were followed in 2011 on account of an eclipse. “We have nothing in our hands and whatever rituals are finalised, we will abide by it,” said Premananda Das Mohapatra, former secretary of Daitapati Nijog.