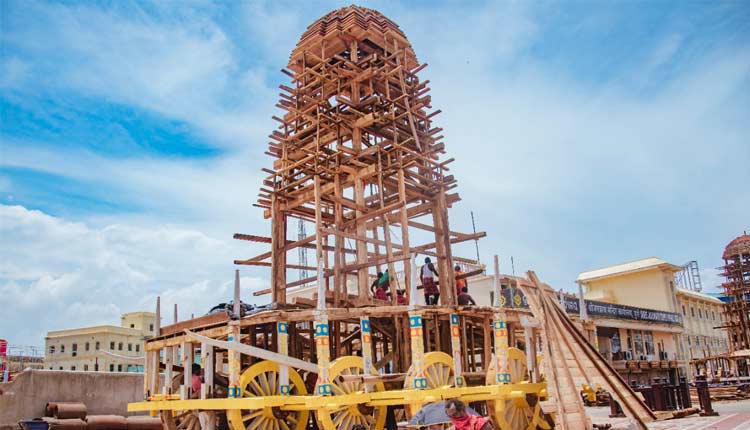 Puri: Eminent sculptor, MP & member of the Puri Temple Managing Committee, Raghunath Mohapatra on Saturday urged the Odisha government to conduct the Rath Yatra of Lord Jagannath without devotees, while requesting that the pilgrim city of Puri should be completely shut down on the day of the chariot pulling.

Mohapatra urged the government to allow selected servitors and police personnel to pull the chariots during Rath Yatra.

As the Odisha government is yet to give an official go-ahead for the Rath Yatra this year triggering apprehensions that the festival might be cancelled in the wake of steady rise in novel-Coronavirus cases across the State, Mohapatra said that government should ensure that the centuries-old tradition of the Holy Trinity should remain intact.

“Rath Yatra of Lord Jagannath should be held and rituals should not be stopped. If possible, the entire city of Puri should be sealed during the festival to prevent entry of people from outside. With shutdown, local residents staying near the temple can witness the spectacle from their houses without venturing outside while others can watch it on TV,” Mohapatra said.

The Padma Vibhushan further said that everyone will abide by the decision taken by the government in view of the Coronavirus situation.
It may be noted that after smooth completion of Snana Purnima and Hati Besha rituals, conduct of Rath Yatra remains the next big challenge before the administration.

Earlier on Friday, the Shree Jagannath Temple Administration had held discussions with servitors regarding the conduct of the festival. The temple management committee comprising servitors and other stakeholders is also believed to have submitted various proposals including social distancing and devotee-less chariot pulling during the grand event.

Madhav Chandra Mohapatra, member of the temple management committee said, “We are ready to help the police and administration by pulling chariots just like the devotees. Chariot construction is almost nearing completion and we hope that the festival will be held.”
Meanwhile, in another important development, Koraput district collectorate today issued a restriction on usual celebration of Rath Yatra of Lord Jagannath in Jeypore also known as Sabar Shreekshetra and other shrines in the district.

In a letter to Jeypore Tehsildar-cum-Endowment office Executive Officer, the district collector recommended not to go for the celebration of the traditional Car Festival, pulling of chariots outside the temple citing that congregation of devotees will not be allowed at any cost due to Covid-19 restrictions.

Snana Yatra, Rath Yatra To Be Held Without Devotees This Year!

Unleashing Coal: Commercial Mine Auction To Start From June 18