Here’s How Odisha Police, BSF, CRPF Accomplished One Of The Biggest Counter-LWE Ops In Malkangiri

The recent success of Police, BSF, CRPF in terms of combing ops and arms seizure has jolted the rebellious and anti-national designs of the Maoists in the Swabhiman area. 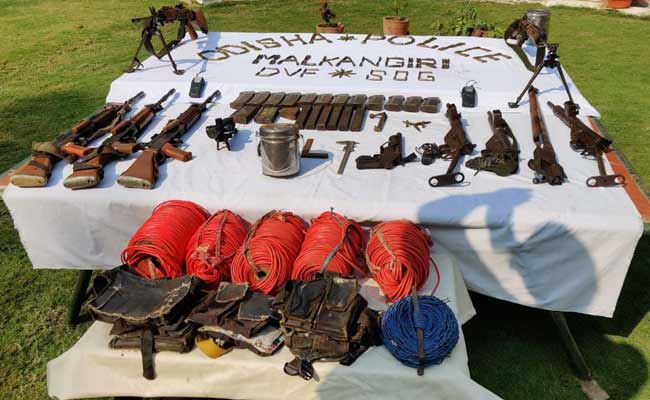 Addressing a press conference at the DG camp office in Bhubaneswar, DGP Abhay said that an extensive composite operation was launched by Odisha Police, BSF, CoBRA battalion of CRPF and greyhounds of Andhra Police to provide security coverage for road construction in the cut-off areas which was opposed by the Maoists.

The DGP revealed that this operation lasted for 3-4 days and gave us a lot of information about how the Maoists were operating in the area. Immediately after this composite operation, there was an exchange of fire between the Maoists and a team led by SP and comprising SOG and DVF commandos of Odisha Police at Goiguda village on January 15, 2020.

As a result of both these incidents, we got specific information about the places where arms and ammunition of Naxals were hidden, he said.

Based on the info recovered from Maoists documents and electronic devices seized, the SOG and DVF teams of Odisha Police launched intense search and area domination exercises which subsequently resulted in uncovering of the major Maoist hideouts and dumps in Swabhiman Anchal and adjoining areas. This led to recovery and seizure of a huge quantity of Maoists arms, ammunition. equipment and other important articles.

Abhay said that this is the biggest seizure of arms and ammunition ever by Odisha Police and probably among the biggest seizures when it comes to combing in LWE-hit areas. “Though these search ops were done by Odisha Police teams, we gratefully acknowledge the contribution of CRPF and BSF towards all anti-Maoist ops in the State. We also acknowledge the cooperation of Andhra Police in this regard,” the DGP added.

It is suspected that these arms and ammunition could have been looted from the police in the past. This is under verification. It is also being said that the cache of arms was hidden by the Maoists of Andhra-Odisha Border Special Zonal Committee (ABSZC). In the wake of the recovery, police have intensified combing and area domination exercises in the region in a bid to recover more such Naxal dumps, if any.