Govt Apathy! Villagers Build Bridge On Own In Odisha 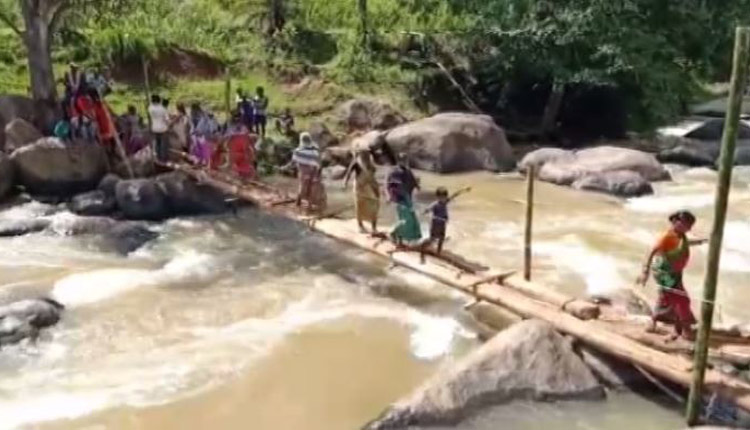 Kandhamal: Decades after independence, there are places in many interior pockets of Odisha where even basic facilities are a dream for people. Forget about roads and bridges, instances of people crossing rivers using tubes and cable are still normal in parts of State.

Despite tall claims of the government about welfare policies, residents of K Nuagaon block in the district are still victims of sheer apathy of the administration.

Locals say that they are deprived of basic transport and communication facilities and even though they have approached the district administration several times to construct a road to Birindipada area, their pleas have fallen to deaf ears.

Fed up with the alleged negligence of the government, the villagers have come forward to construct a wooden bridge all by their own.

“Earlier we used to cross the river using an electric cable. After the administration removed it, we paddled through water risking our lives. But at last we decided to construct a bridge and made it up with wood by ourselves,” said a local resident.

Showing her displeasure over government’s apathy, she added that political leaders rush to their area to seek votes and made tall promises but after getting elected, they vanish.

“I request the administration not to damage the bridge like they uninstalled the cables that we used to cross the river. If they cannot help us, its fine but at least they should not make tall promises that they cannot fulfil,” said another local.

Notably, hundreds of villagers, including women, children and elderly people, used to cross the river with the help of electric cables in Bindhapada area of Kandhamal district on a regular basis for their daily needs. But after the news was aired on OTV, the administration removed the cable.

Ileana D’Cruz Has Perfect Recipe To Soothe Her Soul #Watch