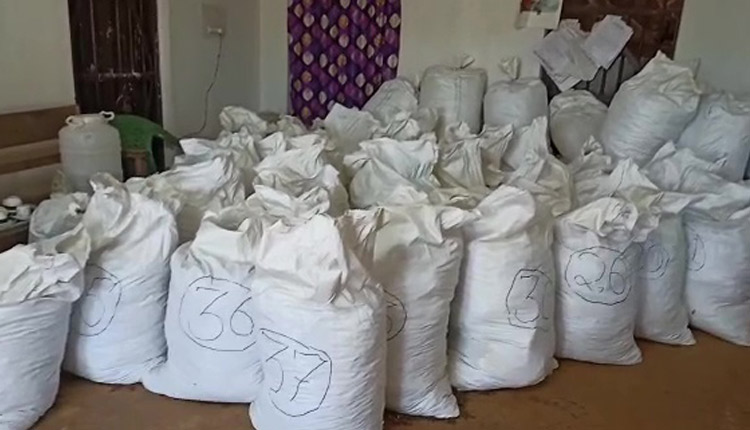 Koraput: Despite a regular crackdown by police and excise officials, smuggling of ganja and other contraband items continues unabated in Koraput and other districts in southern Odisha. In the latest instance, over 12 quintals of ganja (dry cannabis) worth over Rs 1.30 crore were seized from two separate places in the Koraput district.

The contraband was seized by Padua and Lamtaput police during raids conducted as per the direction of the district superintendent of police (SP). While 10 quintals of ganja were seized from a truck near Badapada ghat, Padua police seized 2.49 quintals of contraband from another truck.

Over 12 quintals of ganja worth Rs 1.30 crore seized from two separate places by Padua & Lamtaput police in #Koraput district; driver of a vehicle transporting the contraband arrested #Odisha

The driver of one of the trucks has been arrested and further investigation into the case is underway, the police said.

In a related incident, Patapur police in Ganjam district intercepted a ganja-laden car near Berhampur-Rayagada National Highway- 326 following a tip-off. One quintal of ganja packed in four bags was seized from the car while police have arrested a peddler in the connection.

The police took two persons travelling in the car to custody for questioning. One of the accused, Joseph Veer of Christian Sahi of Gajapati was arrested. Another accused, who hails from Padmapur police limits of Rayagada district is a minor, sources said.

Notably, a series of ganja smuggling incidents were reported from Koraput district in the recent past. On November 4, a joint team of BSF and Machkund Police had seized over 800 kg ganja worth Rs 80 lakh from a pick-up van near Hanumal village in Koraput district.

On November 1, Koraput police had seized more than 13 quintals of ganja during raids at two places in the district. The market value of the seized Ganja was around Rs 1.5 crore.

Last month, over 13 quintals of ganja worth around Rs 1 crore were seized by Machhakund Police after a raid on a house at Ekataput village under Lamataput block.