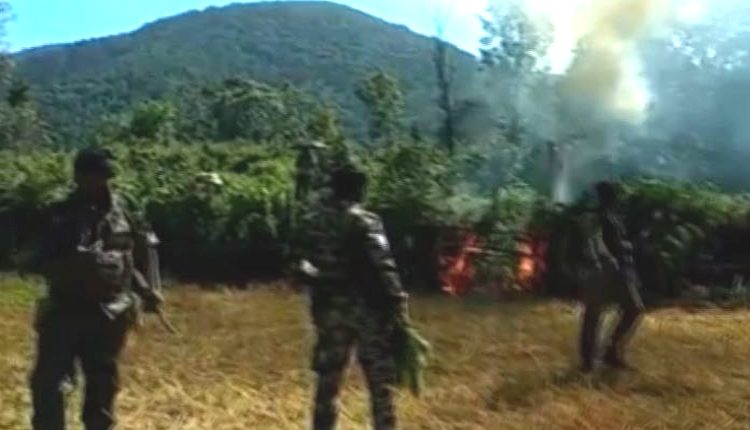 Kandhamal: Intensifying its crackdown on the cultivation and supply of illegal cannabis, a joint team of the Kandhamal police and Excise department officials destroyed ganja cultivation on acres of lands in different forest areas here in the district.

Acting on a tipoff, the police and excise sleuths conducted crackdown in Kudutuli, Jampadar, Janagual areas under K Nuagaon police station and destroyed the cultivation on 170 acres of land by setting the hemp plants on fire.

The cost of the cannabis is worth around Rs 1.5 crore, officials informed.

Notably, a whopping Rs 4 crore worth ganja have been seized and more than Rs 4.5 crore worth hemp plant cultivation destroyed in the past just 15 days.

On Saturday, ganja worth around Rs 20 lakh was seized in Chitrakonda while it was being transported to a neighbouring state. The seizure came a day after over 12 quintals of ganja worth over Rs 1.30 crore was seized at two separate places in the Koraput district.

A joint team of Baliguda Police and Excise department had destroyed Ganja cultivation worth over Rs 90 lakh by burning the crop, spread across several places in Kandhamal.

Similarly, a joint team of the Kandhamal Police and Excise officials destroyed illegal ganja cultivation on acres of lands worth around Rs 1.55 crore in different forest areas of Dudduki panchayat under Sadar police limits in Kandhamal district.

Sources said cannabis cultivation is going on in a massive scale in the hilly areas of Kandhamal and other neighbouring districts due to its increasing demand among inter-state drug-traffickers.