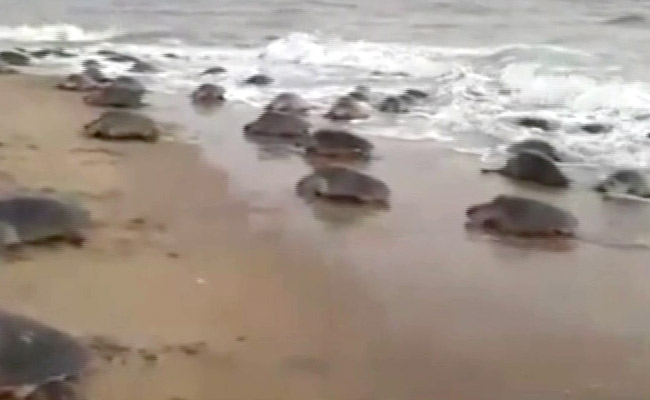 Kendrapara: Once considered the most important nesting beach for the endangered Olive Ridley Sea Turtles, Gahirmatha is now battling with serious problems and turning into a graveyard for the animals. Due to rampant and unrestricted fishing activities in banned zones, there has been a significant rise in the turtle deaths particularly at the confluence points at Barunei, Pentha, Satbhaya and Babubali.

Carcasses of turtles washing up the shores have now become a regular feature and environmentalists allege that lack of stern action by the Forest department officials is putting the Olive Ridleys in danger.

“Due to lack of coordinated efforts by the Forest department and the Coast Guard in the form of intensified patrolling, fishing mafia is carrying out fishing activities even in the restricted zones,” alleged environmentalist Hemant Kumar Rout.

Also Read: 9 Held For Fishing In Prohibited Zone Of Gahirmatha

The deaths are mainly because the turtles either get trapped in the nets or get crushed after hitting the mechanised fishing vessels during the mating season. It is pertinent to mention here that Gahimatha, which is world’s most important nesting beach for Olive Ridley Sea Turtles, was declared a marine wildlife sanctuary in 1997. Every year, thousands of Olive Ridley sea turtles migrate in huge numbers from the beginning of November for mating and nesting along the coast of Odisha.

“In order to save the Olive Ridleys, awareness at all levels is a must,” said Atulya Bal, a local resident.

Though State government has undertaken several measures and is carrying out of massive awareness drives, such rules and regulations are not implemented properly on the ground. “Patrolling is being undertaken in and around the sanctuary to prevent the operation of fishing trawlers from November to March. So far, we have seized over 30 fishing trawlers,” said Bikash Ranjan Das, Divisional Forest Officer.