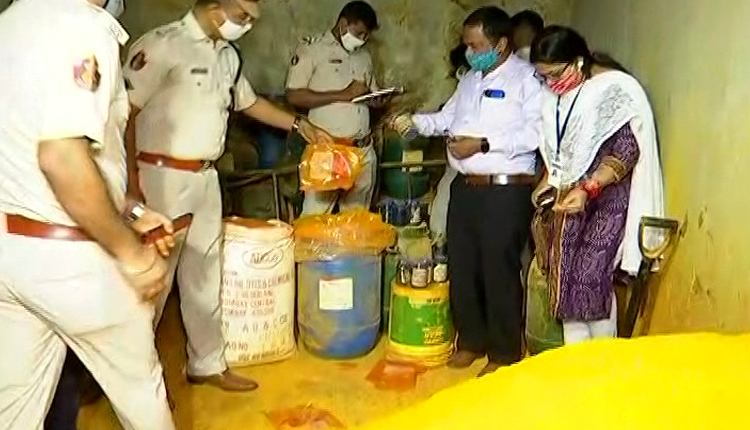 Cuttack: Malgodown police in the city unearthed yet another big food adulteration unit in the area for the second consecutive day creating horror among consumers who are now flummoxed at discovering how many of their day-to-day food items are in fact laced with toxins.

The rampant food adulteration by unscrupulous businessmen in the Silver City has made the alarm bells ringing in the households who do not seem to know which brand to trust now.

The situation has reached to such alarming proportions that such manufacturing units are busted almost every month. Incidents of disclosure of many such units prove that from spices to mustard oil, from ghee to rose water, there seem to be no item left that has been left unadulterated.

This time around, raids in Malgodown area for the last two days have unearthed adulteration units of turmeric powder and red chilli powder, the most important spice ingredients in households.

The health hazards of consuming chemical and dye-laced food are not unknown to people. “If consumed these chemicals and colouring agents can lead to kidney failure and other serious ailments,” said health expert, Dr Bhubanananda Moharana.

Similarly, the Health Officer of Cuttack Municipal Corporation (CMC) who was at the spot during the raid said, “These chemicals are hazardous for our health. They can cause jaundice and many other diseases.”

As per reports, the Malgodown police and a health team from CMC have jointly raided three such adulteration units since the past two days that saw seizure of contaminated foods worth lakhs of Rupees and made three arrests in this connection too.

Shedding more light on the bust, Rabinarayan Bhanja, the IIC of Malgodown PS said, “Products from the Malgodown are supplied to all over Odisha. This is a big unit and I am sure it has a robust supply chain as well, that we are going to bust too.”

Prafulla Kumar Chatoi, Secretary of the Malgodown Trader’s Association said, “We do not encourage these kind of activities in our area. The traders’ chamber is committed to find the root of the illegal trade.”

Notably, this is not the only instance where a huge cache of tainted food items have been seized. Duplicate sauce manufacturing unit was busted in Jagatpur area in last September 20. Similarly several big edible oil and ghee adulteration units were unearthed in 2019.