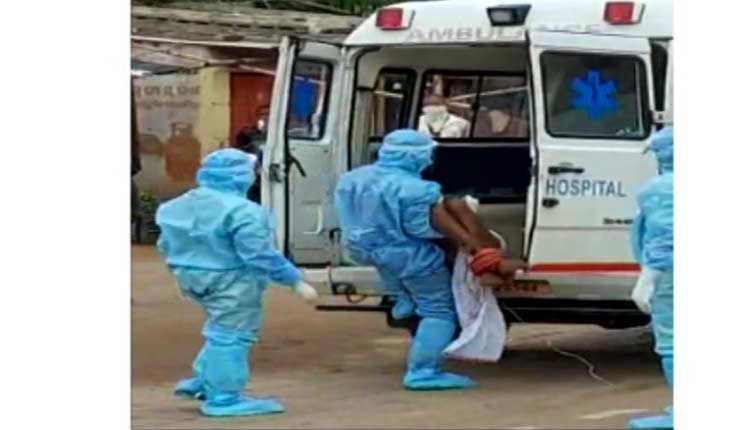 Bhubaneswar: Chaos prevailed near Kalinga studio square in Bhubaneswar for quite some time on Friday after an elderly man was found detained allegedly by locals with his hands and legs tied on suspicion of being a Covid patient. The elderly man is stated to have escaped while being taken to COVID-19 hospital, sources said.

As per initial reports, the elderly man was being shifted to a COVID-19 hospital in Bhubaneswar when he reportedly gave a slip from the ambulance.

Suspecting that the elderly person had escaped from a nearby COVID hospital, locals caught hold of him and tied his hands and legs. What triggered the suspicion among the locals is yet to be ascertained.

Later, a team of police and staff of the COVID-19 hospital, on being informed, reached the spot and rescued the man. He was carried by health workers in an ambulance.

Sources however confirmed later that the man was shifted to a COVID hospital.

It is pertinent to mention that the fear of being diagnosed coronavirus positive and it’s aftermath in a quarantine or hospital have ingrained so much fear into the psyche of people that even after being diagnosed patients attempt to hide fact. Even those with slightest suspicion are being held to ridicule, stigmatised or discriminated supposedly for the fear of infecting others.