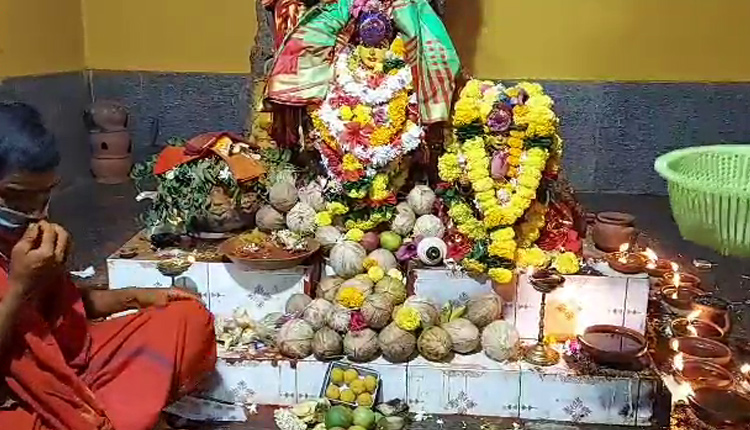 Paralakhemundi: There are many Shakti Peetha (shrines) in Odisha, where Goddess Durga is worshipped in different forms. However, among many, the Danda Maa Durga shrine in the southern Odisha town of Paralakhemundi in Gajapati district carries a special place among the devotees as it opens once a year, only during the Navratri.

Every year, as the Navratri nears, Danda Maa shrine teems with the hustle & bustle of devotees. While the temple is closed all through the year, devotees throng the shrine in large numbers during this festival. As per the custom, the gate of the shrine opens on the first day of Navratri and closes at the end of the 10th day.

Another peculiar aspect that catches attention of every devotee is the termite mound adjacent to the Goddess. The mound is found present during every Navaratri when the shrine opens.

Explaining the legend behind the mound, the priest of the shrine said “The nearby Ramalingeshwar Temple also has a termite mound. During Navratri, a snake makes several trips from this mound to the one at Ramalingeswar Temple. So we consider these two as Mother shrine and Father shrine,” added the priest.

Dwelling further into the legends related to the shrine, the priest said, “The coconuts that the devotees bring here during darshan remain fresh till Navratri next year and do not perish at all.”