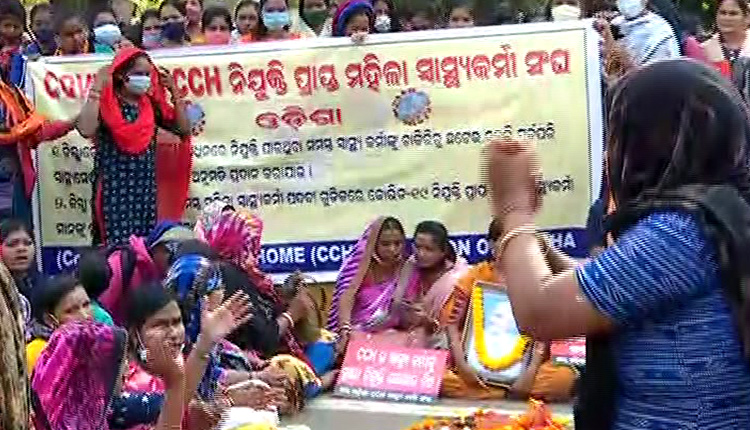 Bhubaneswar: Six days on, disengaged female health care workers earlier posted at different COVID Care Centres (CCCs) and COVID Care Homes (CCHs) continue to stage their demands for regularisation of their jobs and payment of pending salaries. But the government is yet to take a call on the matter.

Hundreds of such health care workers have been protesting against the government’s action at Lower PMG Square in Bhubaneswar since 28 November 2020, but they allege that the authorities have turned a deaf ear to their demands.

A total of 6447 health care workers, ANMs and ASHA workers gathered at Lower PMG Square in the smart city under the banner of All Odisha COVID Care Home Women Health Care Workers Sangh. They have been demonstrating against the removal of some of the health workers from jobs despite Coronavirus threat in the state.

The protesting workers also observed the Manabasa Gurubar (pious ritual of every Odia household to invoke Goddess Laxmi on Thursdays in the Hindu month of Margashira) on road as a mark of protest.

They alleged that the state government laid them off from work when the threat of COVID19 is still looming large in Odisha and there is chance of second wave of Coronavirus outbreak. The protesters have also leveled allegations on non-payment of their salaries of some months.

Putting forth their demands, a health worker said, “We want jobs of all the Panchayat level health care workers to be made permanent. Women here are suffering in bone chilling cold since six days, but no officials have shown up here till now.”

They said that they will be forced to intensify their stir if the government does not pay attention to their demands soon enough. They even threatened to take the protest to the homes of every MLA, Minister and Collector.

It may be noted that Odisha government announced to close down the COVID care centres and homes in mid-September in view of the falling of the occupancy at such centres.

Health and Family Welfare Department Additional Chief Secretary PK Mohapatra had assured that CCCs should also be closed down wherever there are no patients and in other places where the occupancy is less it should be scaled down and the requisite manpower be remobilised to their original positions and in case of CCHs, the health personnel can be redeployed in the districts where their services can be better utilised.