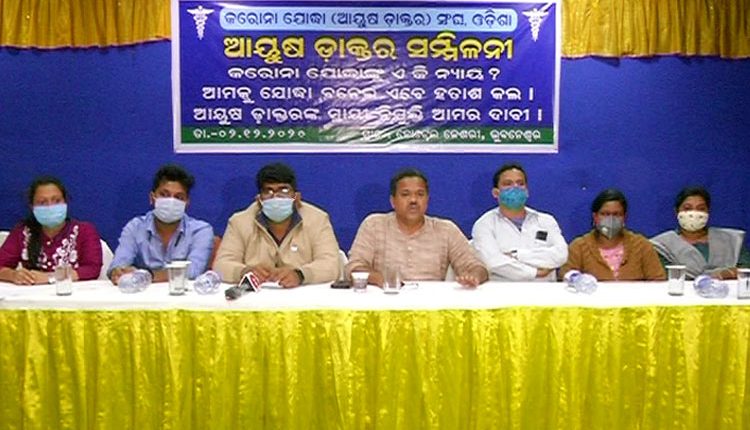 Bhubaneswar: A group of AYUSH doctors, who were reportedly disengaged from service, on Wednesday, alleged apathy by the Odisha government and demanded their reengagement.

The doctors under the aegis of All Odisha Covid-19 AYUSH Doctors’ Association submitted a memorandum of demands to Chief Minister Naveen Patnaik.

The doctors have alleged though they played a significant role in controlling the Covid-19 pandemic, lay off from the service has deeply hurt them.

“The Covid-19 situation is yet to get over and there are possibilities of a second wave of infection. During emergency, government engaged us and recognised our efforts as Covid warriors. But recently we were disengaged and the government is showing indifference attitude towards our plight. It seems every accolade heaped us including the singing of Bande Utkal Janani was just a whitewash,” alleged Ayush doctor, Suresh Satpathy.

“The government used us during the critical phase and now disengaged us when we needed jobs the most. We therefore demand permanent employment,” he added.

Supporting the demands of the AYUSH doctors, Congress leader Sudarshan Das said, “The doctors worked at Covid Care Hospitals. Four of them died while 70 per cent of them contracted the virus. They fought against Covid-19 by risking their lives and saved thousands of lives. But this is pathetic that the government has now disengaged them.”

CBSE To Conduct Class 10, 12 Board Exams In Written Mode Only, Board Rules Out Online Exam