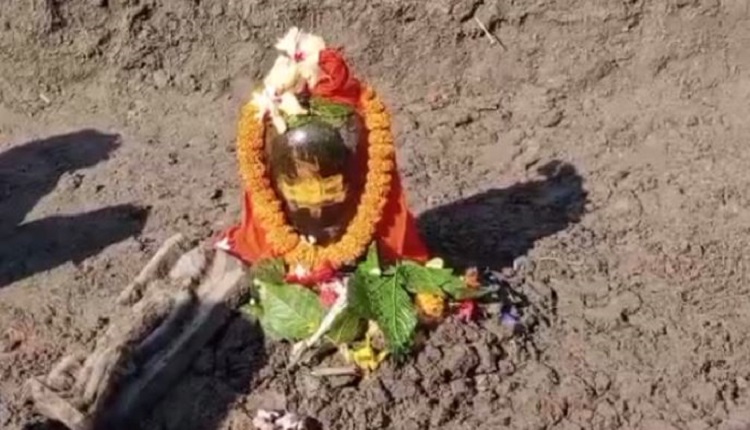 Bhadrak: Devotees in large number throng Baladiapada under Goramati panchyat here in the district after a ‘Shiva Linga’ emerged out of the ground during soil excavation for construction of a park on Saturday.

According to sources, the Shiva Linga was found when ground levelling work being done at the site by a tractor. A part of the tractor got damaged after it hit a stone-like substance. When people cleared the dust, they found the stone to be a ‘Shiva Linga’. As soon as the news spread in the area, villagers make a beeline to the place to worship the deity.

“The Shiva Linga emerged when the tractor was levelling the ground for construction of the park. As soon as I was informed about the incident, I reached the spot and offered puja. A temple will be constructed here,” said Ganesh Tripathi, a priest.

“We are very happy that Shiva Linga has emerged in our village. We are offering puja to the deity,” said Anita, a devotee.

Ganesh Prasad Mallick, the local sarpanch said, “People are gathering in large numbers as soon as the news spread in the area and devotion has gripped the locality.”

Kangana Ranaut Says If No Crackers For Diwali, No Beheading of Trees on Christmas and Cruelty to Animals on Eid Should be Allowed