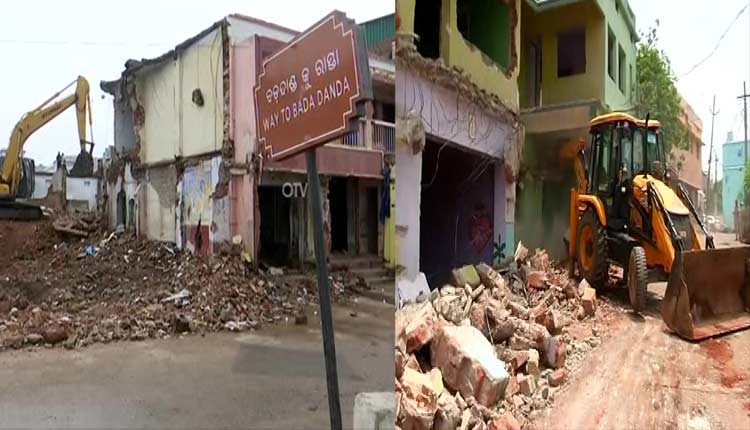 Puri: The demolition drive for renovation of in and around areas of Puri Jagannath Temple and the shrine of Lord Lingaraj resumed today after a hiatus of two months due to the lockdown imposed to arrest the spread of COVID19 in the State.

As the day dawned on Friday, the coastal pilgrim town saw earth-movers and JCBs take position at the northern point of Srimandir to bring down unauthorised erections where the eviction work was halted midway due to lockdown.

Speaking to OTV on the eviction process, Puri Sub-Collector Bhavataran Sahu said, “We have resumed work on the northern side of shrine from where we had left the demolition drive prior to lockdown.”

“Shop keepers in Laxmi Bazar and Dola Bedi area who have already availed the financial package promoted by Odisha Government to let go of their property are being vacated today,” said Sahu.

Speaking about the western front of Srimandir, Sahu said, “We are in a process of dialogue with the Assam Yatri Niwas & Nepal Bhavan at the western side as they are yet to be provided any compensatory package by the government.”

As far as evacuation at the eastern side of the 12th century shrine is concerned, Sahu said, “After demolition of Mangu Mutt, a road has been designed from the Achari Mutt. The beautification plan is underway to design it as a world class tourism spot.”

“The shop owners of Bania patti, Khaja Patti and Bada Akhada Mutt are already getting monthly financial assistance as per the government’s guidelines after demolition.”

“The municipal market complex being constructed would provide ample space for all the shopkeepers to base their business out of there.”

Out of the total estimated area of evacuation, almost 90% have been acquired by the State Government. The rest 10% of the area are entangled with legal disputes and litigation. The government is looking into those issues as well,” informed Sahu.

Asked about the grievances of Mahants of various Mutts that were razed, Sahu said, “The administration is always at their door step. We are taking their feedback at regular intervals and we’ll do whatever it takes to address their issues.”

Similarly, the Bhubaneswar Municipal Corporation authorities also resumed the stalled eviction and demolition work around the Lingaraj Temple in the city.

Speaking to OTV, BMC Additional Commissioner, Abanikant Patnaik said, “We are prioritising the clearance and widening  of road adjacent to Lingaraj Temple today. The encroachments in the area have already been razed. Only the houses whose owners had earlier agreed to transfer the ownership of their property to BMC, are being demolished today.”

Earlier, Odisha Chief Minister Naveen Patnaik on Wednesday had said the development works at Lord Jagannath Temple and Lingaraj Temple will begin from May 29.

Notably, the State government had already released the draft architectural design for the proposed Shri Jagannath Heritage Corridor that includes redevelopment work of Bada Danda, renovation of the temple administration building and Shri Jagannath Culture Centre among others.