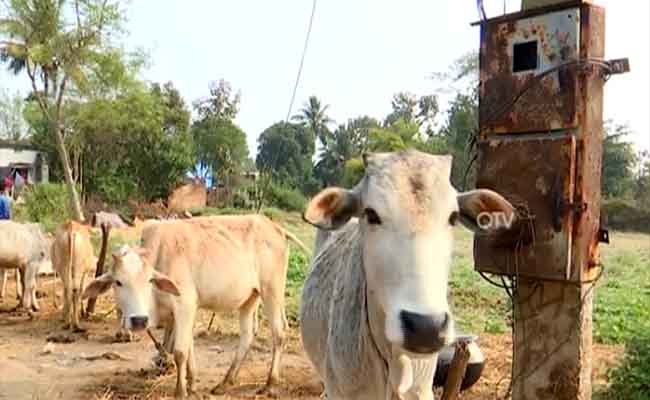 Angul: Despite 73 years after Indian Independence, there are countless areas in Odisha which are yet to get proper electricity connection and it is especially more shocking when many villages none other than in Angul district, ‘the power generator’ in the State continue to grapple with acute dearth of electricity.

According to sources, around 70 families who live in the village have been facing various problems due to unavailability of power connection, non-repair of defunct electricity infrastructure and installation of new systems like electric transformer in the areas.

Locals have levelled allegations of undeclared power cuts, random and forcible collection of electricity bills by the CESU which the natives term it as ‘painful’.

The situation makes it even more compelling at Ankula village situated just a few kms from the town, where people resort to tie their cattle to electric poles, many others see the opportunity to use them to paste their cow dung cakes. But the biggest sufferers are the students especially those who are appearing their life’s first big test-Matric examinations. Due to absence of electricity, students are forced to prepare for their exams even in lamps.

Government sources said, not only Ankula, but also hundreds of villages in as many as 8 blocks of the district are even yet to see light. What is more shocking that this is despite the fact that a whopping 1, 19,941 households are under BPL category.

While quality of life of people in the area has been extremely poor due to extensive pollution in the area, power woes seem to be adding to the misery of the people.

Dibyadarshan Bhutia, a local resident said the power suppliers are cutting electricity at least two to three times a day leading students to lose vital hours of their preparations for exams.

Meanwhile, Angul Jilla Jan Jiban Surakhsya Samiti, a local outfit has demanded the administration to provide free electricity till 200 units to provide a bit of assistance to consumers.

“The government should ensure free electricity to locals up to a specified limit and the CESU and other power suppliers should stop torturing locals in the name of collection of bills,” said Pramod Kumar Pradhan, convenor of the outfit said.

Asked about the issue, District collector of Angul, Manoj Kumar Mohanty said, “Even though I don’t have the capacity to fulfil the demands of the people, I will recommend the people’s suggestions for consideration of the government.

Look Forward To Being With My Great Friends In India: Donald Trump