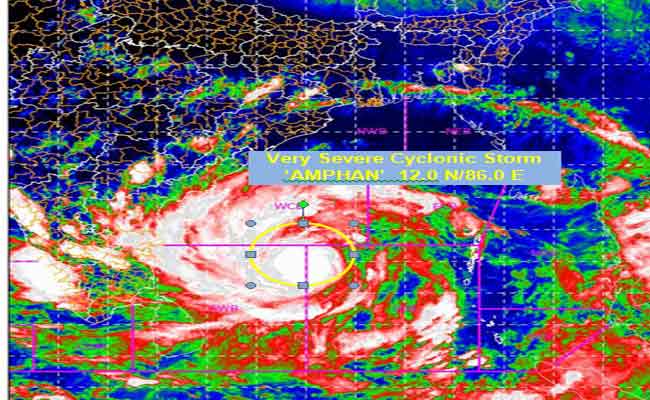 It is very likely to move nearly northwards slowly during next 12 hours and then re-curve north-northeastwards and move fast across northwest Bay of Bengal and cross West Bengal – Bangladesh coasts between Digha (West Bengal) and Hatiya Islands (Bangladesh) during the afternoon / evening of May 20 as a ‘Very Severe Cyclonic Storm, informed Special Relief Commissioner (SRC), Pradeep Jena.

The wind speed will gradually increase becoming gale wind speed reaching 75 to 85 kmph gusting to 95 kmph from 20th morning along and off north Odisha and West Bengal coasts.

#CycloneAmphan | Wind speed may touch 40 to 45 kmph in south #Odisha districts from tomorrow evening & touch 75 kmph on May 19.

It is likely to gradually increase thereafter becoming 110 to 120 kmph gusting to 135 kmph along & off north Odisha coast on May 20: SRC Pradeep Jena pic.twitter.com/0gHYFDEqIs

As many as 10 NDRF teams and 15 ODRAF units have been pre-positioned in the coastal districts of the State to meet any eventuality due to the cyclone.

Official sources said 20 teams of Odisha Disaster Rapid Action Force (ODRAF), 17 teams of National Disaster Response Force (NDRF) and 335 units of Fire and Disaster Management are in readiness to be pressed into service.

While 10 NDRF teams and 15 ODRAF units have been pre-positioned in 6 coastal and 4 nearby districts, further deployment will be planned after getting information from the IMD about the path of the cyclone, said Special Relief Commissioner (SRC) Pradeep Jena.

#CycloneAmphan likely to trigger rainfall in #Odisha from May 18 evening or night onwards. Most coastal districts of State may experience rainfall with few places likely to see heavy to very heavy rain on May 19: Director of IMD’s Regional Met Centre in Bhubaneswar, HR Biswas pic.twitter.com/GK4ukqjhbi

Balasore, Bhadrak, Kendrapada and Jagatsinghpur districts have been instructed to remain fully prepared, said the SRC.

“The trajectory is mostly towards West Bengal, Sagar Islands and probably towards Bangladesh…. But we have to watch the trajectory very closely. NDRF has deployed the teams well in advance. They are either deployed or moving towards the destination,” he said.

Odisha is likely to receive heavy rain under the influence of severe cyclonic storm Amphan, which is predicted to skirt away from the northern coast of the state and make landfall between West Bengal and Bangladesh.

According to the IMD, rainfall will commence in Odisha from May 18 with heavy rainfall likely to occur at isolated places over the district of Gajapati, Ganjam, Puri, Jagatsinghpur and Kendrapara. SRC Jena said the district collectors have been asked to plan for evacuation people living in vulnerable areas to safer places, if needed.

Besides, the officials have been directed to prepare plan for early restoration of affected road communication, drinking water, electricity, infrastructure and an uninterrupted power supply to hospitals.

As preparedness measure for possible cyclone, 567 cyclone shelters and 7000 pucca buildings have been identified to accommodate about 11 lakh people.