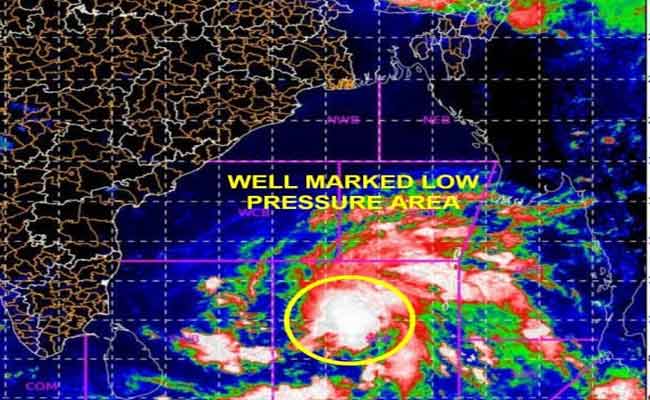 Bhubaneswar: Even as a clear picture is yet to emerge regarding Cyclone Amphan, latest track suggests that it may move along the east coast of India and brush the Andhra and Odisha coasts.

Even though there are subtle differences in several numerical models about its track, several agencies, however, confirmed the formation of a significant storm in the next couple of days.

The associated cyclonic circulation extends upto midtropospheric levels and it is very likely to concentrate into a depression over central parts of South Bay of Bengal tomorrow (May 15) and further intensify into a cyclonic storm over the same region by May 16 evening.

IMD model suggests that the cyclonic system will initially move northwest wards till May 17 and then re-curve and head towards north-northeast wards towards north Bay of Bengal during May 18 and May 19.

Under the influence of the low pressure-turning-cyclone, several places of south & central Bay Of Bengal and adjoining Andaman Sea will continue to witness adverse weather from 15th May onwards.

In an interview to OTV, IMD Director General Mrutyunjay Mohapatra today informed that the low pressure area has developed into a well-marked area in the last 24 hours.

Under its impact, sea conditions along Odisha coast are likely to remain rough from May 18 while fishermen have been advised not to venture into the sea.

Several parts of coastal Odisha will experience rainfall with possibility of heavy to very heavy rainfall from May 18.

“The system is certainly moving towards Odisha coast and it will reach north Bay of Bengal by May 18 and 19. We are yet to assess whether the system will move towards West Bengal or Bangladesh. But only after it intensifies into a depression tomorrow, we can predict its track and intensity when it arrives close to the coast,” said Mohapatra.

Several parts of coastal #Odisha will experience heavy to very heavy rainfall on May 18 and 19. Only after the system intensifies into a depression tomorrow, we can predict its track & intensity, says IMD DG Mrutyunjay Mohapatra https://t.co/0Ot5Y5Q2qJ pic.twitter.com/tpNSvj8kd1