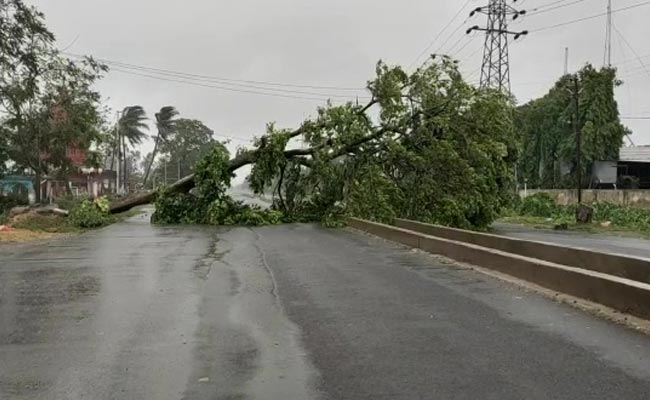 Bhubaneswar: Odisha government has set a target to restore road communication in the State on a war footing as cyclone Amphan on Wednesday uprooted trees, electric poles and damaged houses in several parts of the State, especially in the coastal belt.

“As per preliminary reports, several trees were uprooted, electric poles damaged and road communication disrupted in Jagatsinghpur, Kendrapara and Bhadrak districts under the impact of the storm. At some places, electric poles were uprooted and cables snapped,” said special relief commissioner (SRC) Pradeep Jena at a press meet today.

He said that the target has been set to clear the stretches and restore road communication in the next 12 hours. Besides, efforts are on to restore power supply as soon as possible.

“In Jagatsinghpur, Kendrapara and Bhadrak, clearing of roads by cutting the uprooted trees have already begun. Electric department employees are also conducting preliminary assessment to check snapping of cables,” he added.

Speaking about the death of a child, Jena said, “We have received reports of death of a child in Tihidi of Bhadrak district. The district Collector has sent a team comprising tehsildar, medical and police officials to inquire into the matter. The body has been brought for post-mortem, following which the cause of death can be confirmed.”

After the post-mortem report, appropriate action will be taken in this regard, he said.

Speaking about evacuation of people, Jena said residents in Jagatsinghpur and Paradip who were shifted to shelter homes will be sent back to their home by today evening. “As the impact of the cyclone is still there in Balasore, the district collector will take decision regarding shifting of people,” he said.

According to the SRC, more than 1.48 lakh people were evacuated to safer places ahead of the cyclone Amphan. Similarly, 1885 expectant mothers were shifted to hospitals in last two days, he added.

Domestic Flight Services To Begin From May 25: Civil Aviation Minister