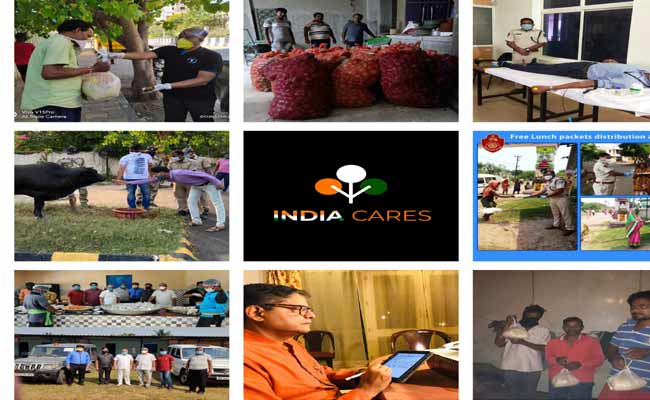 Bhubaneswar: Think of any problem, be it medicine or ration or even hearing aid cells, it is now getting delivered right at the door step of people during the toughest times of COVID-19 lockdown. Thanks to the volunteers spread across the length and breadth of the country who move mountains to help amidst strict lockdown rules. And Odisha has been one of the front runners in every bit of volunteerism in individually and organisation-wise reaching out to the needy.

After the yeoman service IPS officer Arun Bothra rendered to people that drew appreciation and more people started seeking help from far and wide, many volunteers joined hands with Bothra to help India. Thus was born India Cares, a non-profit voluntary group that immediately reaches people in distress even in the remotest part of the country.

India Cares so far has helped over 180 people across the country within seven days of coming into existence. The group has a dedicated team of 1172 volunteers from 29 States & UTs who are helping fellow citizens 24×7. Nearly, 500 volunteers joined India Cares within three hours of its formation last week and the number is expected to rise, it is learnt.

The volunteers that include youngsters, senior placed officials and professionals are now flooded with SOS messages through various social media platforms including Twitter and Telegram.

During lockdown such instances of help with all sorts of requirements from basic essentials to medicines, camel milk and other products have reassured trust in humanity. Not only with products, India Cares had recently arranged accommodation for a girl who braved a journey from Imphal to Delhi to save her sibling undergoing treatment for leukaemia at the Fortis.

Thank you @indiacares_2020 for the rays of hope you’re spreading amid the gloom. Salute to the entire team. https://t.co/Ck5vzk5eJj

The @indiacares_2020 team is doing an amazing work in helping people across the country. There is hyper activity on the groups telegram chat and it’s heartening to see distressed people getting help and their problems solved .People are getting medicines,blood,rations. #KUDOS

Similarly, Spread Happiness Foundation, an NGO formed by Odia professionals in Pune has been extending help to migrant families from Odisha who are now stranded there.

Jyotiranjan Panda, a member of the NGO said, “Though many migrant Odia families left for hometown, hundreds are still stranded in Pune. After getting to know their plight during the lockdown, we decided to help them in whatever way we can.”

According to Panda, initially they started providing cooked meals to the families with assistance of locals and government officials. Now they are providing 400 packets of dry ration to the needy by collecting funds within their sources.

Humanity doesn’t end with humans alone… Animal Welfare Trust Ekamra (AWTE) with its volunteers in Bhubaneswar (with the help of Cuttack and Bhubaneswar Municipal Corporations) are ensuring all stray animals get food at least once a day. They have divided areas and are feeding cooked and dry food to stray animals in every part of the cities.

The Odisha government has approved additional funds of Rs 80 lakh under Chief Minister’s Relief Fund (CMRF) for feeding stray dogs and animals in urban and semi-urban areas across the State during the extended lockdown period till May 3, 2020. Apart from the funds with the Urban Local Bodies (ULBS), namely 5 Municipal Corporations, 48 Municipalities and 61 NACs across the State, AWTE and around 50 volunteers are feeding around 1000-1500 stray animals every day.

A lot of people and institutions including Commissionerate and Odisha Police are organising blood donation camps to ensure that there is no shortage of blood in any blood bank across the State during the lockdown period. Even OTV employees had conducted a donation camp recently. The move would certainly come to the rescue of thalassemia patients, mostly children, who are always required to be transfused.

With blood banks grappling with shortage amid #CoronavirusLockdown, #OTV employees today came forward and donated blood in a voluntary blood donation camp organised on the premises of the media house#OdishaFightsCorona pic.twitter.com/nuVPKkmrtS

Well writer philosopher Joseph De Maistre had said “in a democracy, the people end up with the government and leaders they deserve.” Rightly so, not only Odisha and Odias deserve a leader like BJP National Vice-president and former Kendrapara MP Baijayant Panda but the country would need more such leaders who has been voluntarily helping needy people to in the country and outside. His help to Odia migrants abroad in coming back has so far been unparalleled and now during lockdown, he has been channelising all help to anyone who has needed intervention.

Many times with some of his team members and at times With the help of BJP karyakartas, Panda has been reaching out to people with food and ration in these trying times. A couple of days ago, he ensured that ration was delivered to 2,000 migrant Odias in Tiagarh in Kolkata. Counting the numbers of people who have benefited from his help would belittle the gigantic effort he is putting up in good and bad times.

Deepest gratitude to my fellow @BJP4Bengal karyakartas for delivering rations to 2,000 migrant Odias in Titagarh, Kolkata

Rquest was rcvd from Manoj Ray & fwded by my office

(We are aware that many silent crusaders working for the country as Corona Warriors. We would be happy to know from you if anyone is doing his/her bit as a volunteer to help the needy in these testing times. Do send your details of work, photographs and videos to otvwebportal@gmail.com if you are one of the unsung heroes)