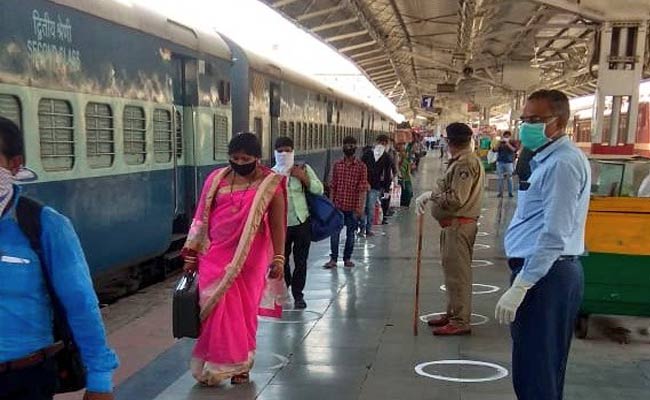 Bhubaneswar: In a move likely to derail the COVID impact after a massive migrant influx in State, the Odisha government has cancelled all trains scheduled for departure from Surat tomorrow.

The decision was taken after the Orissa High Court today directed the State government to allow entry of only those people who test negative for COVID-19 after undergoing RT-PCR tests (in the respective States where they are presently staying), informed Surat Collector Dhaval Patel.

“The State Government should ensure that all the migrants who are in queue to come to Odisha should be tested negative of COVID-19 before boarding the conveyance,” the order mentioned.

In view of this, the three scheduled trains from Surat have been cancelled. The state government will, however, bear the RT-PCR (Reverse transcription-polymerase chain reaction) test expenses.

Clarifying on cancellation of tickets, Patel informed, “Given that these are unforeseen circumstances, we have intimated the Divisional Railway Commissioner to refund them all.”

Four trains- 3 from Surat and 1 from Calicut have reportedly reached Jagannathpur station in Ganjam district today. Three more trains from Surat will arrive at the station tomorrow, said ECoR.

Meanwhile, Odisha Health Minister Naba Das said that the State has requested Union Health Minister Harsh Vardhan for additional testing kits. “We have also asked the Centre for testing of migrant workers before they are allowed to return to Odisha. Out of the 1000 samples collected from Surat returnees, 4 per cent have tested positive for COVID-19,” Das said.

So far, around 39765 migrants have returned to Odisha from other States by bus, train and other vehicles. Of these, around 27000 people have returned to Ganjam district alone which saw a big spike in COVID-19 count today after detection of 24 new positive cases.

Speaking about the returnees, Ganjam Collector Vijay Amruta Kulange said, “So far, around 27000 people have returned to Ganjam from other States in 12 trains and 283 buses. There is no concrete information on how many more will come. Anyone found visiting quarantine centres to meet their family, friends or relatives will be forcibly quarantined or else legal action will be taken against them.”

Fighting strategically, the Odisha government has planned to ramp up the COVID-19 testing capacity by establishing 11 new laboratories. The State crossed the milestone of 50,000 tests on Wednesday.