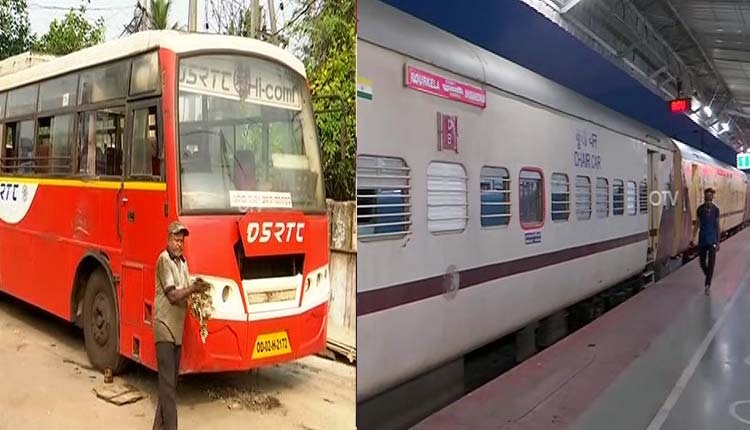 Bhubaneswar: As malls, hotels, restaurants and places of worship were opened in many states of the country as part of the phase I of Unlock 1.0 or lockdown 5.0, the East Coast Railway (ECoR) and Odisha State Road Transport Corporation (OSRTC) resumed their services within Odisha today.

The buses and train service had remained suspended ever since lockdown was enforced in the State from March 22 as a precautionary measure to prevent the transmission of Covid-19.

As per reports, the OSRTC engaged 96 buses on 66 routes across the state while the ECoR operated six passenger trains on the first day.

Tickets for these special trains are available on passenger reservation system counters at different railway stations. Passengers can also book ticket through online on IRCTC website. Persons with confirmed tickets will only be allowed to board the train, said the ECoR.

The ECoR has advised the passengers to carry food and linen and reach 90 minutes ahead of the departure of the trains.

Meanwhile, a special intra-state train chugged out of the Rourkela railway station for Bhubaneswar at 5.10 am. “Thermal screening of passengers before they board a train is being conducted at the entrance of all stations,” an ECoR official said.

“We are happy that trains have started operation after a gap of two and half months. The trains have been properly sanitised and they look cleaner than before. There is fear for coronavirus infection in our minds but we can tackle it with our awareness,” said a passenger who boarded the Rourkela-Bhubaneswar special train.

On the other hand, OSRTC started bus services to 22 towns within Odisha. “Initially, we have started operations to connect 22 towns within the State and more buses and routes will be added later,” said OSRTC CMD Arun Bothra.

No standing passengers are allowed in the buses and wearing of masks has been made mandatory for all passengers. Additional cleaning measures have been put in place to disinfect the buses, added Bothra.

Transport services are limping back to normalcy in the State. 96 OSRTC buses started plying on 66 routes from today. Other OSRTC buses will resume operations in coming days: #Odisha Transport Minister Padmanabha Behera pic.twitter.com/FjkZgjmy6m