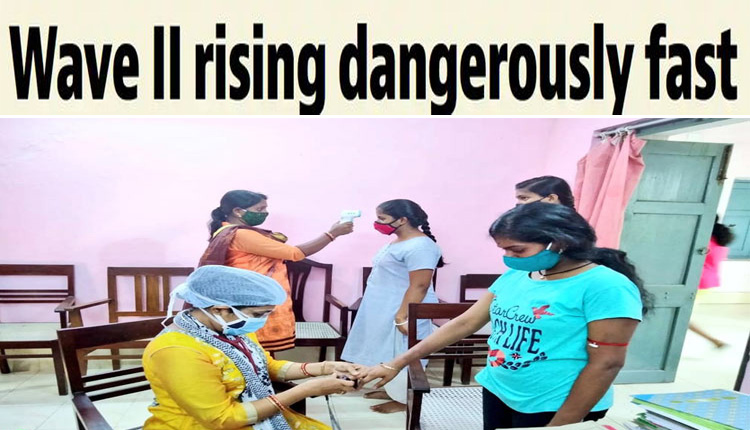 Bhubaneswar: With the Active caseload in Odisha crossing the 4000 -mark today, the State has made an entry into the top-20 states with the high active caseload, among 36 states and UTs, in the country.

Moreover, the big trend to fore is at the current rate of growth in the daily new confirmed cases, it looks apparent that the daily caseload in Odisha will breach the 1k-mark in the next 96 hours.

How speedier is the take-off in active caseload in Odisha is evident from the fact that the State took nearly 43-days to clock the distance from 500-plus to 4k-mark. The number of active cases in the State stood at 557 on February 23 and the actives on 6th April crossed the 4k-mark to a total of 4073.

WILL ODISHA JOIN THE 1K PER DAY RACE SOON?

Going by the last 7-days average growth rate of around 11 per cent in the new cases, the trend shows that in the next 96-hours, Odisha will join the list of states with 1000 new cases per day.

The challenge before the State is even if the new cases in the State grow at an average rate of 5 per cent from the April 5 count, Odisha in all probability will add another around 14,000 new cases by the end of April.

The Test Positive Rate (TPR) in the second wave has been on the ascent since march last week. The daily TPR from below 0.5 per cent in March last week has grown up to touch 2.5 per cent today.

However, the contrasting fact is during the first wave the daily TPR hovered around over 4 per cent in mid-July 2020 when the daily new cases crossed the 500-mark.

The comparative data analysis shows that despite higher tests the State has a very low TPR in the country, which is a fact of relief for Odisha.

As per the epidemic curve in Odisha since last fortnight, the April first week has recorded a sharp spurt in cases in the State. A look at the 7-days rolling average of new confirmed cases nails the rising trend.

The 7-days moving average in March last week was 220, which has been marginally higher than the new cases (218) on March 30.

In contrast, when the succeeding seven-days rolling average has been estimated at 380 in Odisha, the new cases detected on April 6 stood higher at 588. And the new cases today has risen sharply to 791.

Significantly, the proportion of new cases versus the 7-days rolling average on April 6 grew to a high of 55 per cent from a mere 0.91 per cent in March last week.

THE BOTTOM LINE: The sharp up-slope in the epi-curve in April first week indicates that the State has entered into the explosive phase of the second wave.