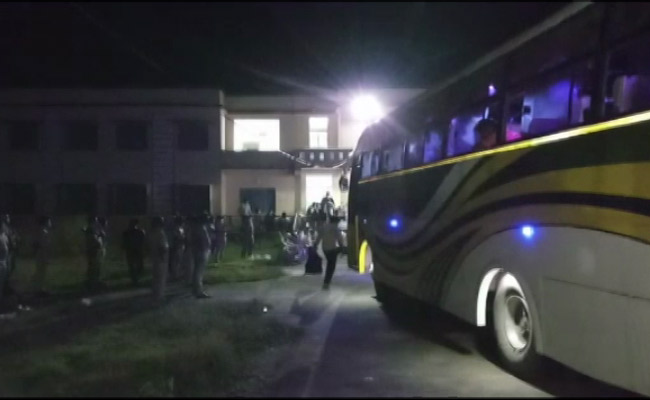 Ganjam: As many as 217 Odia migrants who were stuck in Gujarat’s Surat amid the nationwide lockdown following COVID-19 outbreak have finally arrived in Ganjam today after a journey of over 60 hours.

As per reports, the first lot of stranded migrants from Surat boarded in four buses on Monday and reached Seragad and Dharakot areas of Ganjam on Thursday midnight. The migrants had booked the vehicles on their own expenses to reach their home State. Surat district administration had granted the required permission for the same.

As the migrants have arrived from a Coronavirus affected State, all of them have been lodged at a government quarantine centre and will stay there for the next 14 days. Prior arrangements were made at Dharakot and Seragad Model Schools for quarantine purpose. Swab samples of the travellers will be tested and none of them will be allowed to their respective homes during the quarantine period. Moreover, no family members of the travellers will be allowed to meet them.

Each of the quarantine centres is facilitated with over 100 beds and needful arrangements have been made. After swab sample tests and completing a quarantine period of 14 days, the health department will discharge them if they don’t show any signs of COVID-19 infection and their health condition remains stable.

Taking to Twitter, Ganjam Collector Vijay Amruta Kulange confirmed the news. The authorities have strictly barred the public from visiting the quarantine centres where the returnees are lodged.

All four buses reached at Quarantine centre. 217 people returned from Surat. Primary health screening done. We request all people of ganjam not to visit these quarantine centres. Strict action will be initiated if any violations @CMO_Odisha @HFWOdisha @PRDeptOdisha pic.twitter.com/TXIr4gMGzg

Meanwhile, four more buses from Surat will be arriving in the State soon. Of the four buses, one has set off from Surat while three others will commence the journey today. As per sources, as many as 57 passengers in the buses are from Bhadrak, Kendrapara, Khurda and Jagatsinghpur districts. The passengers have purchased the bus tickets at Rs 3,500. Of the three buses to set off from Olpad near Surat, one bus will carry passengers to Ganjam while the other two buses will arrive at Bhadrak’s Tihidi.

Odisha CM Naveen Patnaik had earlier held discussions with his Gujarat counterpart regarding safe evacuation of Odia workers from the State amid the lockdown.

Odisha Students Stuck In Kota To Return Back Home

Similarly, as many as 975 students of the State, who were stranded at country’s premier coaching hub, Kota in Rajasthan due to the ongoing lockdown will begin their journey to home from Thursday.

While the students have made arrangements for their own transport, the state government has facilitated the permit for travelling in buses. As per sources, as many as 1200 students from Odisha are now stuck at Kota, and their parents had earlier appealed to Chief Minister Naveen Patnaik to ensure their safe return to the state. Of the total number of students, the State government has prepared a list of 975 students.

As many as 116 students from #Odisha who were stranded in Kota, Rajasthan amid #COVID19 lockdown are returning to the State in four buses. The students, mostly residents of Rourkela are reportedly arriving on their own expenses of around Rs 4000 per head pic.twitter.com/1pvyu8a0me

“The government has taken up the matter with Kota administration in Rajasthan and is ensuring the safe return of the students,” said a senior IPS officer in charge of coordinating with other states.

The State government has also asked the students to strictly adhere to social distancing and quarantine guidelines after arriving at their respective districts.

Odisha government acted on the process of bringing back the students after the governments of Jammu & Kashmir, Uttar Pradesh, Maharashtra and Assam took similar measures to bring back students of their respective states.

On behalf of all parents, mother of a student who is returning from Kota expressed her gratitude to Odisha CM and BJP National Vice President Baijayant Panda.

On behalf of all parents, I am grateful to #Odisha CM Naveen Patnaik & (BJP National Vice President) Baijayant Panda for extending help in bringing back our children: Mother of a student who is returning from Kota, Rajasthan to Odisha amid #COVID19 lockdown pic.twitter.com/1sh1HflUXc