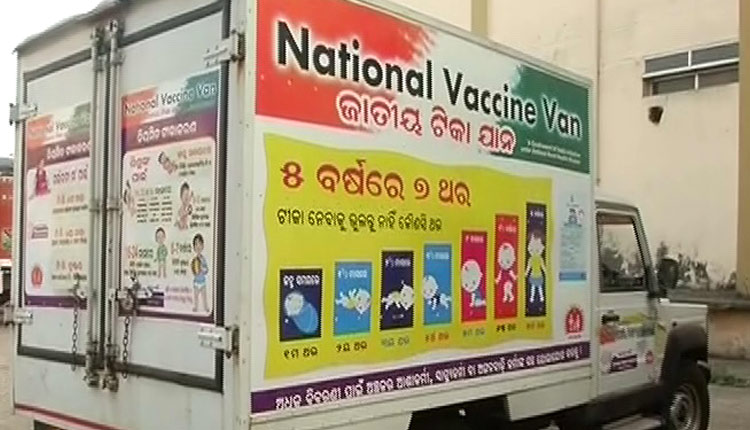 Bhubaneswar: Ahead of India’s vaccination drive, the world’s largest immunisation exercise against coronavirus, which is set to kick off on January 16, the first consignment containing vials of Covishield vaccine dispatched from Serum Institute of India in Pune reached Odisha at around 3:30 PM on Tuesday.

The vaccine Covishield landed at Biju Patnaik International Airport in Bhubaneswar in a special SpiceJet flight.

Additional Chief Secretary (Health) PK Mohapatra informed that Odisha is receiving around 4.08 lakh doses of Covishield vaccine prepared by the SII. This apart, the State has also received a letter from the Centre regarding the dispatch of another 20,000 doses of Covaxin.

All the vaccines will be kept as per protocols at the State Vaccine Store in Bhubaneswar for further distribution to districts. Sources said by the next 48 hours, the vaccines will be distributed among all districts where it will be stored at district vaccine stores and subsequently taken in cold chains to 160 session sites for vaccination drive on January 16.

Extensive arrangements have been made for the mega vaccination drive in Odisha. The State government has identified around 160 session sites across all the districts for Covid-19 vaccination programme, and special teams have been formed to vaccinate close to 3.29 lakh healthcare workers including Anganwadi workers in the first phase.

“We have decided to administer COVID-19 vaccine as per age-groups of the healthcare workers. According to the decision, elderly health workers will be vaccinated first. Apart from this, we have decided to give priority to the districts which have a high number of COVID-19 cases,” Mohapatra added.

The State government has already conducted dry run for vaccination twice this month – on January 2 and January 8, and all districts have been instructed to be in readiness for the vaccination programme.

Apart from health care workers, the State government has also decided to vaccinate all the police personnel, officials engaged in disaster management including Collectors and BDOs, Municipal workers, Revenue department officials and others. A database of all such personnel will be prepared and uploaded by January 25.

The first batch of Covishield vaccines left Pune-based Serum Institute of India in the wee hours today for delivery to all States and UTs, four days ahead of the nationwide launch of the inoculation drive.

Odisha: Here Are The Revised Guidelines For Marriage Processions & Funerals