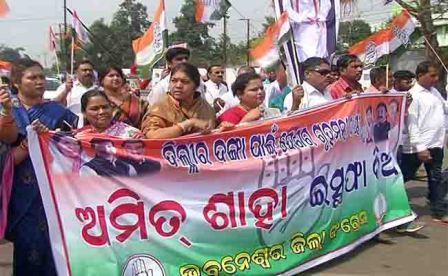 Bhubaneswar: Congress activists in different parts of Odisha staged demonstrations on Friday against Union Home Minister Amit Shah, demanding his resignation in the wake of communal clashes in Delhi.

The Congress’s State unit, which was opposing Shah’s two-day visit to the state, organised demonstrations in Bhubaneswar, Cuttack, Bhadrak and Atahgarh, among other places.

“Shah is the home minister of the country, he should take moral responsibility for the communal clashes in the national capital and resign,” said senior Congress leader Bhakta Charan Das.

Today, a Congress delegation, including party chief Sonia Gandhi met President Ram Nath Kovind and submitted a memorandum demanding the resignation of Amit Shah over his alleged “abdication of duty” during the communal violence in Delhi.

Brazilian Jiu-Jitsu: The Most Practical Self-Defence Martial Art For Women