Close Shave For COVID-19 Patients As Ambulance Overturns In Odisha 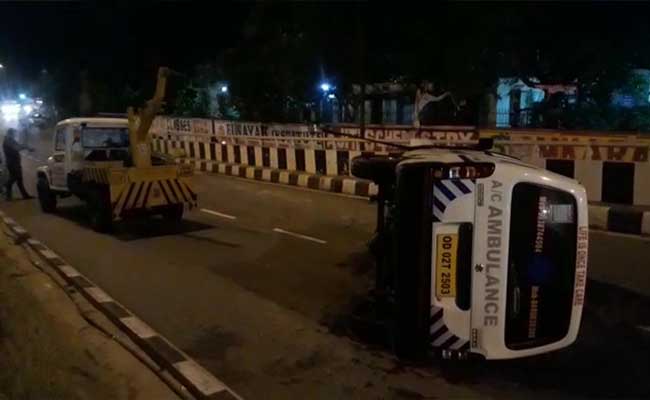 Cuttack: Some patients reportedly infected with COVID-19 had a narrow escape after an ambulance transporting them overturned on OMP overbridge under Chauliaganj police limits in Cuttack on Thursday night.

According to sources, five ambulances carrying coronavirus patients from Jajpur were heading to an exclusive COVID hospital in Bhubaneswar when one of the vehicles hit the divider and overturned. While the ambulance driver sustained minor injuries, the patients inside the vehicle escaped unhurt.

Ambulance that overturned near Chauliaganj in Cuttack was reportedly carrying #COVID19 patients from Jajpur to Bhubaneswar; all patients & driver safe; accident spot sealed and sanitised along with the ill-fated vehicle pic.twitter.com/C9Ek4C1Iu3

Soon after the mishap, police personnel from Chauliaganj police station rushed to the spot and sent the ambulance driver to a nearby hospital for treatment. The officials also arranged another ambulance to shift the patients to Bhubaneswar.

The district administration sealed the area after the mishap and carried out disinfection drive to sanitise the area and the ambulance.

According to police sources, the diver of the ambulance reportedly dozed off for a split second following which the vehicle crashed into the divider.

It can be mentioned here that at least 17 people, including seven women and two children, tested positive for COVID-19 in Jajpur district today, taking the total cases in the district to 36. Odisha’s tally now stands at 142 with 47 cases reported in Bhubaneswar, followed by 36 in Jajpur, 19 each in Bhadrak and Balasore, 10 in Sundergarh, two each in Kendrapara and Kalahandi and one each in Cuttack, Puri, Dhenkanal, Koraput, Jharsuguda, Deogarh and Keonjhar districts.