Cuttack: Three persons including a woman had a close shave after the car they were travelling in caught fire on National Highway 16 near Sardal in Choudwar area on Saturday.

As per reports, the car caught fire moments after hitting a stray bull on the busy road.

“We had just filled petrol from a filling station and were on our way to Cuttack when a bull came right in front of our car from nowhere,” said Nasima Khatun adding that the car immediately caught fire after hitting the animal.

Driver along with a woman & her son narrowly escape after car they were traveling in catches fire near Sardala on NH-16 in Tangi area of Cuttack. The mishap occurred after the vehicle reportedly hit a bull and lost its balance. #Odisha pic.twitter.com/IgVvvsdX5Z

Nasima hails from Soro area in Balasore and was travelling to SCB Medical College and Hospital in Cuttack along with her son and a driver.

“We had to abandon the car after noticing smoke rising from the bonnet. When the flames started erupting, I immediately asked my son and the driver to get out of the car,” Nasima added.

Following the incident, traffic on the busy highway came to a grinding halt. Soon a team of fire fighters reached the spot and managed to douse the flames after an intense operation. 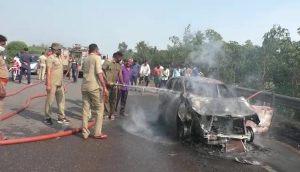 “We rushed to the spot immediately after getting the emergency call. As it was a petrol car, we had to initiate quick action. All the occupants of the car are safe. The car has been completely gutted in the fire mishap,” said Krupasindhu Behera, an official of Tangi-Choudwar Fire Station.