Bhubaneswar: The Odisha government increased the fares of bus across all categories in the wake of an increase in the fuel prices.

As per the information shared by the State Transport Authority (STA), the fares of Ordinary and Express buses have been increased by 1 paisa/KM while fare of Deluxe and AC Deluxe buses increased by 2 paisa/KM due to increase in diesel price.

However, there will be no hike in the fare of city buses playing in the State, the STA said in an official notification. The revised fares of other stage carriages will come into effective from today (January 20).

As per the revised fares, the fare of Ordinary buses has been increased to 74 paise/KM from existing 73 paise/KM while the Express buses will charge 77 paise per KM now instead of 76 paise.

The fare from Bhubaneswar to different towns for different category of buses: 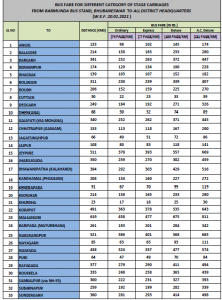