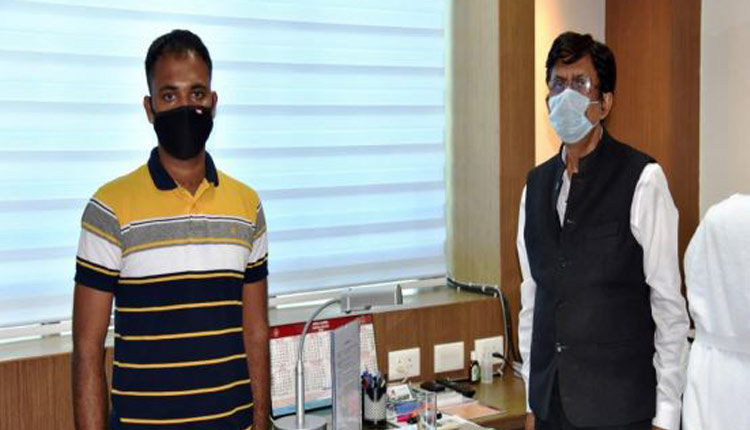 Dhenkanal: An OSAP sepoy has earned praise from all quarters for showing exemplary bravery and thwarting a firing attempt inside a bus in Bhuban police limits of Dhenkanal district. The braveheart sepoy, Himanshu S Patra, will be conferred with DGP disc as a mark of recognition for his bravery.

Patra confronted miscreants when they tried to open fire at a bus on Baji Rout overbridge in Dhenkanal district on Friday evening.

According to sources, three youths, on their way to Bhuban from Cuttack on a bike, had entered into an argument with the bus driver for overtaking. The irate miscreants waylaid the bus near Nilakanthapur and one of them opened fire at the bus.

Patra, who was travelling in the bus showed exemplary bravery and snatched the weapon from the miscreant and overpowered him.

The news of the incident soon went abuzz on media making Odisha Police laud the efforts of the sepoy. “Odisha Police is proud of such members of its force who display highest commitment, not only while on duty but also on leave,” said a statement issued by the State police.

Dhenkanal SP is also all praise for the sepoy. Taking to Twitter, the SP wrote, “Salute to the Bravery of Sepoy Himansu Sekhar Patra of 2nd SSBn. He was travelling as a civilian under Bhuban PS when miscreant with a Pistol entered inside the Bus and threatened the driver. He could snatch away the Gun from assailant and hence prevented a mishap from happening.”

DGP Abhay who invited the brave heart sepoy for a cup of coffee with him in his office wrote in his Twitter handle, “He is  brave, sincere  and  simple man .I have informed him  about conferring DGP disc on him  as a recognition of his bravery.”

I invited brave heart Sepoy Himanshu S Patra for a cup of coffee with me in my office .He is brave, sincere and simple man .I have informed him about conferring DGP disc on him as a recognition of his bravery. https://t.co/S3ZJrTyViS pic.twitter.com/xPn6fTxiek

Replying to the tweet, senior IPS officer Amitabh Thakur wrote, “Thank you so much @DGPOdisha Sir. Instant appreciation by the Chief will enthuse him even more and motivate all others @odisha_police.”

Thank you so much @DGPOdisha Sir. Instant appreciation by the Chief will enthuse him even more and motivate all others @odisha_police https://t.co/NjzmZ8QuDM

Apart from the police administration, family of Patra also expressed happiness for his brave act. “I feel very proud that my son has shown such bravery and saved the bus driver. I hope that he would display more such bravery in his career,” said father of the sepoy.