Bhubaneswar: Senior security advisor in Union Home ministry K Vijay Kumar today said the number of Maoist in Malkangiri district has drastically come down due to regular combing operations by the Central forces and the Odisha Police. Briefing newsmen after his meeting with chief minister Naveen Patnaik at the State Secretariat here, Kumar said the […]

Bhubaneswar: Senior security advisor in Union Home ministry K Vijay Kumar today said the number of Maoist in Malkangiri district has drastically come down due to regular combing operations by the Central forces and the Odisha Police.

Briefing newsmen after his meeting with chief minister Naveen Patnaik at the State Secretariat here, Kumar said the purpose of the visit was a courtesy call. “Last time I had met him with the Union Home minister few months back. There I had told him that I would meet him after six months. However, my meeting with the chief minister was delayed because I was working mostly in Chhattisgarh and Jharkhand. After a gap of six months I came here and took the opportunity to call on him,” he informed.

Asked about the recent operation against the Maoists in Malkangiri district, Kumar said the joint operation was carried out by the Odisha Police and the Grey Hound squad of Andhra Pradesh Police.

“The joint operation is a very good sign of close coordination between the two neighbouring states in flushing out the left wing ultras,” he added.

Stating that Malkangiri district is a very difficult geographical area, he said as the number of Maoists in this district has substantially reduced, the Red Rebels operating in Odisha have combined with the Maoist outfit of Andhra Pradesh as their strength is gradually coming down.

Replying to the warning given by the Maoists to retaliate against the killing of their cadres, Kumar said “Conducting anti-Maoist operation is our mission and duty. The government has empowered us by legally providing arms and ammunition to us to protect the people and ensure their safety. But they (Maoists) have no legal, moral and ethical grounds to keep arms and ammunition with them. Though the Home ministry has urged them to lay down their arms and discuss the about their issues, there has been no consensus among the Maoist cadres till date. If they ignore the proposal of the government and indulge in violence by killing innocent people, it is our duty to stop such brutal acts perpetrated by them,” he pointed out.

Talking about the allegations of the Maoists, Kumar said whenever our forces are successful in anti-Maoist operations, the Maoists usually come up with release to the media maintaining that the operations were stage-managed and deliberate encounter. “But our approach is different. We are doing it for the safety and security of the people. We are constitutionally doing it. Sometimes mistakes can happen from our side, But is it up to you to decide which side is correct,” he noted.

Replying to the construction of the Gurupriya bridge in the cut-off area of Chitrakonda block in Malkangiri district which has been inordinately delayed, Kumar said the project has been going on for quite some time. As there has been a cost escalation, the state government is having regular correspondence with the Centre demanding more financial assistance for timely completion of the bridge. “Since you have raised this point, I will take up the matter with the Home ministry,” he assured.

Kumar, however, did not reply to a question on the recent encounter of eight SIMI terrorists in Bhopal. “SIMI case does not come under my purview,” he pointed out.

Official sources said Kumar is scheduled to have a meeting with the CRPF and Odisha State Armed Police (OSAP) personnel to review the Maoist activities and anti-Maoist operations in the state. Meanwhile, Director General, CRPF, K Durga Prasad is scheduled to arrive in the state later in the day.

Considering the visit of the two senior officials, there is a plan to formulate strategies to launch a major operation against the Red Rebels, a senior official told OTV on condition of anonymity. 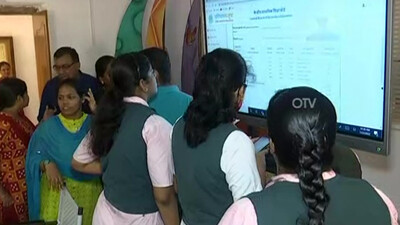