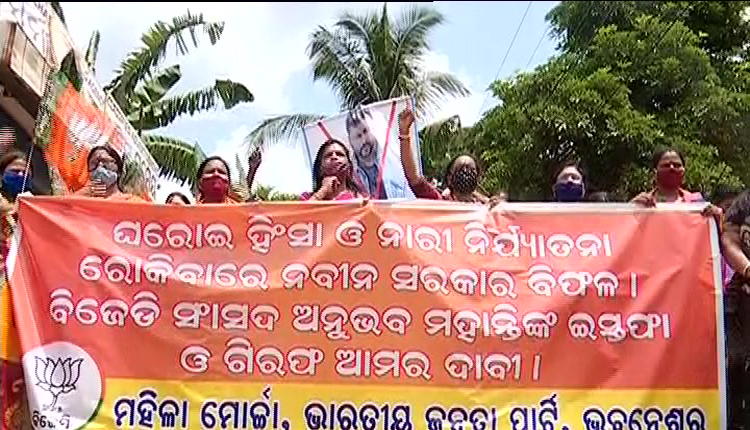 Berhampur: Amid the domestic violence allegations brought in by Barsha Priyadarshini, wife of BJD MP Anubhav Mohanty, various wings of Bharatiya Janata Party (BJP) across Odisha today hit the streets. They raised slogans against the Kendrapara MP and burned his effigies.

Staging a protest in the capital city, BJP Mahila Morcha demanded resignation of the parliamentarian and sought Chief Minister Naveen Patnaik’s intervention into the matter. “CM Naveen should be answerable for it,” said BJP women’s wing leader, Subashini Prusty.

“Naveen always extols the glory of women and urges one and all to respect them. So, he should intervene and take immediate action against the BJD MP,” she said.

All India Democratic Party Women’s Committee also staged a protest near Bhatimunda Madhu Bridge in Tangi of Cuttack district. They also raised slogans against the MP and burned his effigy.

“We demand Anubhav’s arrest and seek justice for Barsha. It seems that a huge controversy is going on against Barsha and it should end immediately,” stated Josnarani Sahu, a member of the committee.