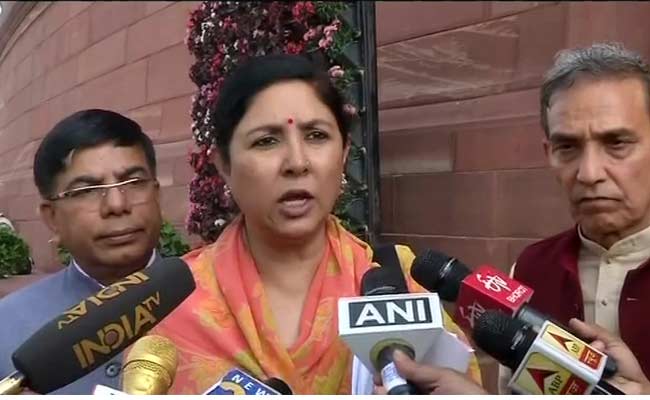 New Delhi/ Bhubaneswar: The Bharatiya Janata Party (BJP) MP from Bolangir, Sangeeta Kumari Singh Deo on Tuesday accused two women Congress MPs of assaulting her during the Lok Sabha proceedings amidst the on-going ruckus in the House for the past two days.

In her formal complaint lodged with Speaker Om Birla, Sangeeta Kumari alleged, “I suffered bruises after two women MPs- Ramya and Jothi caught hold of my arm and one of them hit me with her elbow. Luckily, Smrithi ji held me otherwise I would have fallen on the ground.”

The Bolangir MP further expressed concern over the state of affairs in the House and demanded action against the Opposition MPs.

“This is an unfortunate situation and it is not how the Parliamentary democracy works. It is fine to put forth views but you cannot start assaulting each another in the temple of democracy,” said Sangeeta.

Along with a formal complaint, Sangeeta also submitted dispensary’s prescription. She further stated, “I have put forth what transpired and the rest is up to him (Speaker). I have been in Parliament for a long time. I had never seen such unruly behaviour.”

Earlier on Monday, a group of women MPs met Birla and raised the alleged attack on another BJP MP Jaskaur Meena and its Chikkamagaluru MP Shobha Karandlaje with him.

In her complaint to Birla, Karandlaje wrote, “I am appalled to report to you the misbehaviour thrust upon senior MP Jaskaur Meena by Congress MPs. That a senior member can be jostled in the House is against all norms of decency.”

Calling it a “perverse desire to vitiate the proceedings,” Karandlaje sought expulsion of the Congress MP.

However, Ramya Haridas of the Congress alleged misbehaviour by BJP women MPs. Following the on-going ruckus which is continuing for the past two days, the House was adjourned for the day.

Naveen urges Centre to accord classical status to Odissi music