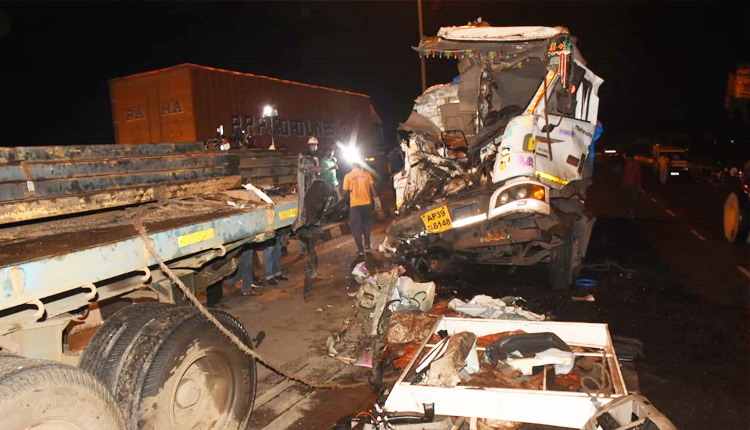 Bhubaneswar: A driver who was trapped inside the mangled cabin of a truck that met with an accident on a flyover in Bhubaneswar was rescued after over 2-hour-long operation.

The injured driver has been identified as Farooq from Andhra Pradesh. Farooq was rushed to the Capital Hospital in a critical condition.

According to sources, Farooq was driving the goods-laden truck when he accidentally rammed into another truck loaded with heavy iron bars on the flyover near CRP square in the city.

The cabin of the truck was badly mangled under the impact of the collision and Farooq got trapped inside it. The fire services personnel rushed to the scene and launched a rescue operation.

Goods-laden truck dashes into a trawler at Baramunda flyover in the capital city; one person sustains critical injuries. #Bhubaneswar #Odisha

Gas cutters and other high-tech machinery were used to separate the entangled parts of the vehicles and subsequently the driver was rescued.

The accident had disrupted traffic on the highway. Traffic police were deployed at the site and road traffic on the NH was diverted through the service road near Baramunda.