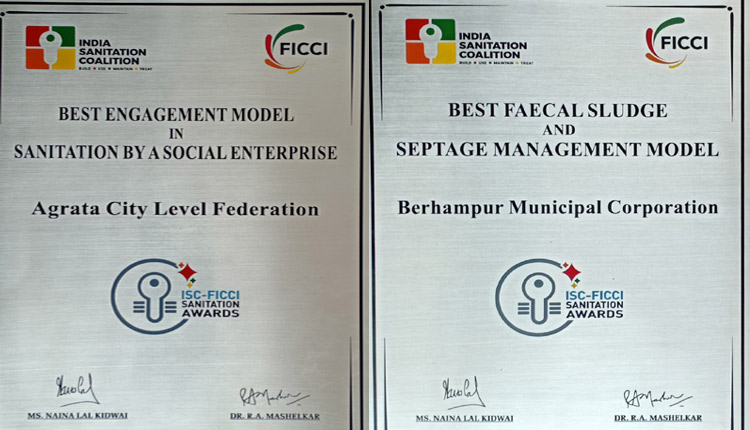 Berhampur: Recognizing the efforts of Berhampur Municipal Corporation (BeMC) for the cleanliness drive in the city through innovations, community-driven and sustainable Faecal Sludge and Septage Management system, Ministry of Housing and Urban Affairs has honoured the BeMC with two national awards at the ISC-FICCI Sanitation Awards 2020 held on Thursday.

The Award, constituted by India Sanitation Coalition (ISC), in collaboration with FICCI, was presented to the BeMC Commissioner today in a virtual ceremony graced by Union Minister Hardeep Singh Puri.

Delighted after the achievement, BeMC Commissioner Dr Siddeshwar Baliram Bondar explained the key steps taken by the authorities in this regard. “Community-led faecal sludge and septage management programme was started in 2017 addressing all the stages of the value chain. Construction of community toilet, public toilet, households toilet was done. We had improved our cesspool service delivery and tracking of the cesspool vehicle service was done. And subsequently, septage treatment plant was made functional,” Bondar said.

The Commissioner further said, “Massive awareness regarding safe faecal sludge management was done and we had involved the SHGs, which was one of the initiatives taken by the BeMC. We are regularly imparting training to all the stakeholders involved in the FSS management.”

The Berhampur city has adopted a cost-effective, citizen-centric, sustainable model that can be adopted in similar cities across India, he added.