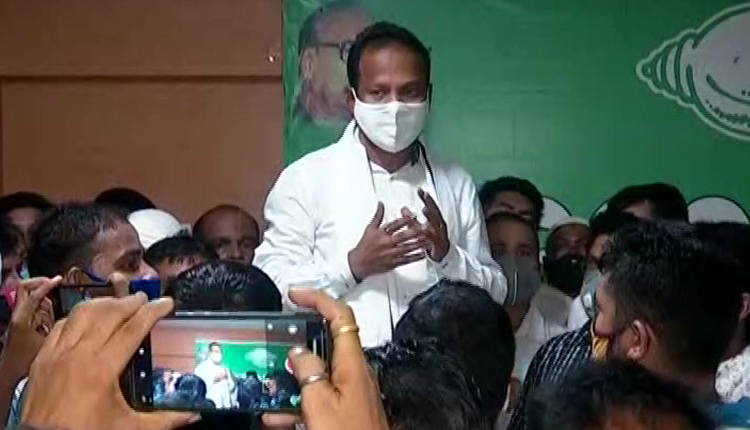 Bhubaneswar: With the political climate heating up ahead of the by-elections in Balasore Sadar and Tirtol Assembly seats, the ruling-Biju Janata Dal (BJD) faces a challenge, particularly in Balasore after the party side-lined Rabindra Kumar Jena and nominated Swarup Das as their candidate.

Following the agitation by Jena’s supporters in Balasore demanding ticket for him, top brass of the party including Rajya Sabha Member Pratap Keshari Deb were seen thronging the constituency to placate both Jena and his supporters. Sources said, even other senior leaders are communicating with Jena to pacify him.

“Rabi babu is with us,” said Pratap Keshari Deb to allay concerns of resentment.

Surprisingly, not only BJD leaders and workers in the constituency but the party’s nominee Swarup Das also came out in support of Jena. Despite all the support, denial of ticket to Jena has puzzled many.

“He was my political mentor. I am disappointed that he has been sidelined,” said Swarup.
An agitating supporter of Jena said, “We want either RK Jena or his wife Subasini Jena as BJD’s candidate.”

Speculations are rife that Jena’s exclusion could be on account of the CBI inquiry pending against him in the chit fund scam. Moreover, some people in the know of things even say Jena’s defeat in the 2019 election and his gradually diminishing popularity among the urban voters could be the reason.

However, downplaying the controversy, Jena said, “Politics is such that the party has to go beyond emotions and sentiments and take tough decisions. I will respect the decision and work for the party.”

Speaking on the controversy, BJD MLA Debi Prasad Mishra said, “Jena already had a meeting with the party high command. There is no dispute in the party about his role.”

Rains Claim 30 Lives In Telangana, 19 Of Them In Hyderabad