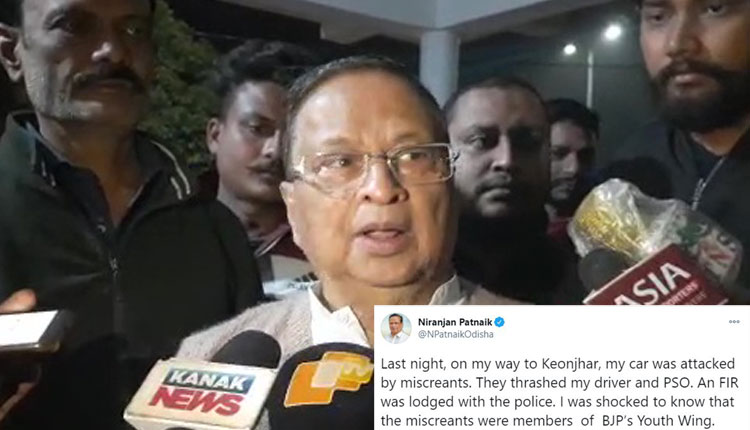 Bhubaneswar: A day after categorically denying any political motive behind the alleged attack attempt on him, Odisha Pradesh Congress Committee (OPCC) president Niranjan Patnaik on Monday termed the act ‘a handiwork of the BJP’.

In a series of tweets, the PCC chief claimed the miscreants who attempted to carry out an attack on his vehicle in Keonjhar on Sunday night were members of BJP’s youth wing and said this was a clear case of political vendetta and desperation of Odish BJP.

“Last night, on my way to Keonjhar, my car was attacked by miscreants. They thrashed my driver and PSO. An FIR was lodged with the police. I was shocked to know that the miscreants were members  of  BJP’s Youth Wing,” Patnaik wrote.

“This is a clear case of political vendetta and desperation of Odisha BJP. Congress is raising relevant issues in the State and speaking out against the policies of BJP, which is desperately trying to get a foothold in Odisha. Congress is the biggest hurdle for them,” he wrote in his verified twitter handle.

Condemning the attack, the Congress leader questioned BJP state president Samir Mohanty and Odisha in-charge D Purandeswari as to why the party is behaving like ‘a coward’.

“I want to ask Samir Mohanty and D Purandeswari why is your party behaving like a coward? I can understand the fear Odisha Congress invokes in your hearts, but why send goons? Is your party so intellectually impotent that you can’t find ways to fight us democratically,” he questioned.

“I am shaken by this incident! Not because it happened to me or because of the trauma it has caused me. I am shaken because if it can happen to me, how safe are our mothers and daughters in Odisha?,” Patnaik added.

Interestingly, soon after the alleged attack that took place near Keonjhar Congress Bhavan at Kashipur last night, the PCC chief had said that he did not suspect any political motive behind the attack.

“Apparently the youths were returning from a picnic in an inebriated state and intercepted our vehicle after overtaking near Kashipur. When my PSO stepped out of the vehicle to inquire, they assaulted him. However, such an incident in a place like Keonjhar is alarming,” he had said.

Today, the Keonjhar Town Police Station detained one person, identified as Sanjay Mohanty, in connection with the alleged attack. His questioning is on. The police are yet to disclose his political affiliation or credentials.