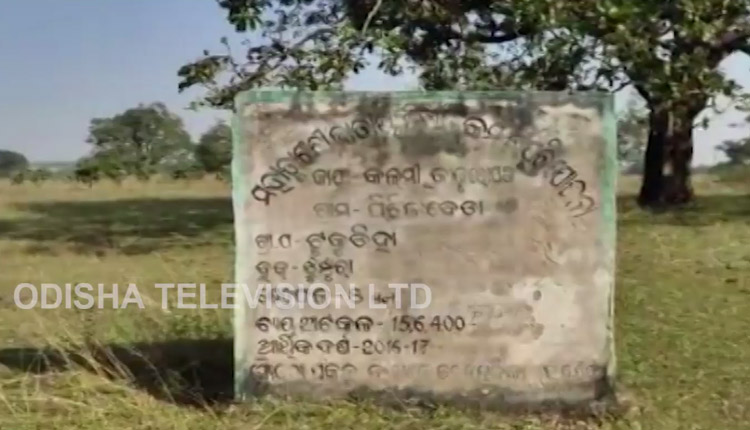 Keonjhar: At a time when the government is spending crores of rupees for various afforestation projects, jaw-dropping allegations on embezzlement of lakhs of Compensatory Afforestation Fund Management and Planning Authority (CAMPA) funds have come to fore from Keonjhar district.

According to the afforestation project plaque installed at Pichilabeda village under Tukudiha pachayat here, a whopping fund of Rs 15,06,400 was outlaid to sow cashew plants on eight hectares of land, but the real picture tells a different story.

As per the information available, more than Rs 22 lakh has been spent under MGNRG Scheme since 2016-17 to plant 200 cashew trees per hectare. But shockingly, only 22 plants have been planted at the site in the last four years.

The story is nothing different from Rasabantala area where around Rs 20 lakh was spent for forestation. But forget about forest, the land has now only some patches of wild bush and weeds.

Smelling something fishy in the project, an environmentalist had knocked the door of Lokayukta following which a Vigilance probe into the matter has been ordered.

Opening up on the situation, Anam Charan Mahanta, a local resident narrated that forest land was fully planted but the plants were destroyed by termites and grazed by the cattle due to improper management.

However, Arun Kumar Das, the project director said in his clarification, “As per the rule, we maintained the plantation for two years and handed it over to the locals so it is their duty to preserve the trees until they are fully grown. Besides, all dues of the people under the MGNRGS have been cleared.”

Meanwhile, action has been initiated against the erring officials in connection with the CAMPA fund irregularities in Poipani reserve forest.  Acting on the DFO’s report, forester Jyotshnarani Behera and guard Madhusmita Dora have been suspended.

“Acting on the villagers’ complaint, we have initiated a probe into the alleged irregularities. The matter is under probe and appropriate action will be taken against the erring officials after completion of the investigation,” said Swayam Mallick, Keonjhar DFO.