Ahead Of Summer, Water Woes Crop Up Across Odisha 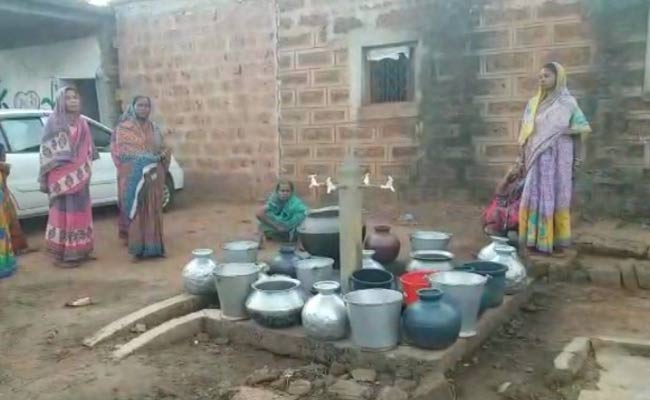 Balasore/Nuapada: Summer is still a few days away, but the drinking water problems have returned to many villages across Odisha sparking resentment. Be it near a tube well or pond, the sight of long queues of women with pots on their head greets one in many places. While in some villages the problem is just manifesting itself, in others, water scarcity is already acute.

At least three villages under tribal-dominated Mahisapatta Gram Panchayat under Nilagiri block in Balasore district alleged that the drinking water project isn’t functioning because of the non-payment of water dues by the Sarpanch. There are three tube wells in Salabani village, but water in none of those is allegedly suitable for drinking. Similarly in other villages people could be seen making queues as early as 3AM in the morning to get some water.

Sources said keeping in view the rapidly depleting water resources; the government had implemented Basudha Scheme in the locality in 2006-07. The sharing of the water bill was decided to be in 3:1 ratio, with 3 parts to be paid by the Panchayat and one by the villagers. But the villagers of Salabani, Rajasahi and Kuanali alleged that the Sarpanch never paid the bill effectively forcing the closure of the project.

Saraswati Singh, a local standing in queue for water said, “We have been paying our share of water dues every month, but don’t get any benefit from it. We have to wait for hours in front of tube well to get some water.”

Speaking to OTV, the Sub-Collector of Nilagiri, Harish Chandra Jena said, “I will talk to the NESCO authorities and the RWSS officials about this. We will sort out the problem if there is any.”

Similarly, Gopalpur village under Ghasipura block in Keonjhar district is reeling under the drinking water woes as well. There is a single tube well for a village of 30 families and the water from that tube well is too polluted to drink, alleged villagers.

Jayanti Majhi, a local of Gopalpur said, “We don’t get clean drinking water here. The only tube well discharges polluted water, so we have to bring water from a pond far away.”

Komana block in Nuapada district is grappling with scarcity of water as well. The lone tube well in Poinar village is running dry. There is an overhead water tank constructed in the village, but that’s of no use as villagers alleged that the tank remains empty all the time.

Reports of drinking water came from Pandua village under Kamakhyanagar block of Dhenkanal district as well, where more than 200 families of Harijan Sahi are suffering. The drinking water project completed five years ago by spending lakhs of Rupees is lying defunct. There are three tube wells in the area but not even one of them works, it is alleged.