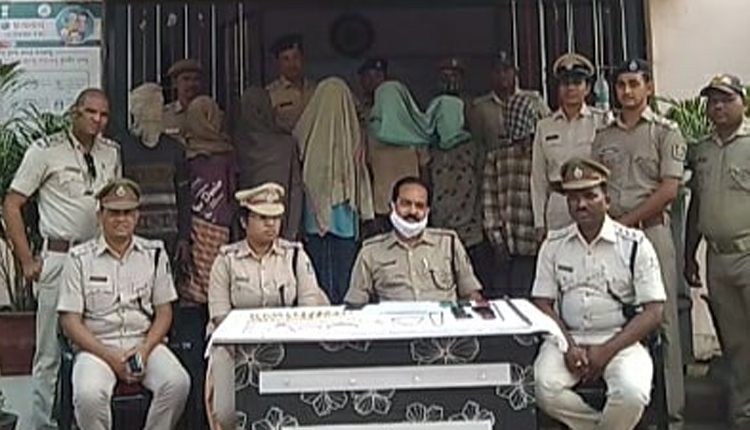 Berhampur: In a major breakthrough, police claim to have busted multiple theft cases in Ganjam district following the arrest of 7 robbers on Monday. Around 309 grams of gold ornaments and several mobiles phones have been recovered, police said.

According to police, a joint team of Polasara and Kabisurya Nagar Police launched an investigation in connection with 6 different theft cases registered at Polasara, Kabisurya Nagar and Hinjili Police station, and managed to nab all the accused.

While four of the arrestees belong to Bajrakote area in Aska, two are from Sorada. The other person is a resident of Sheragada and happens to be the receiver of theft items.

Briefing the modus operandi of the criminals, police said that the miscreants chalked out plans on how to execute the crime and assembled near the crime spots at around 11 PM. Late night, they used to break into the house by drilling hole in the door. They have robbed several houses under Polasara, Kabisuryanagar, Hinjili and other police station limits of Ganjam district. They then distributed the gold ornaments and cash among themselves and also disposed of some of the gold ornaments before one Kuresh Dakua of Dhabalpur in Sheragada.

During the course of the investigation, police seized gold ornaments (chains and rings) weighing 309.45 gm and equipment used for drilling holes in the door to break into houses. This apart, police have recovered seven mobile phones from their possession.

Several cases have been registered against them at Polasara police station, Kabisuryanagar PS and Hinjili PS, under section 457/380 of the Indian Penal Code, police said.

In another incident, seven persons were apprehended today after Gangapur Police in Ganjam raided a gambling den near Khukundia river bed. Rs 30,460 cash and four mobile phones have been from their possession.