Though the Earth Networks' report didn't show any let-up signs as far as the lightning strike intensity is concerned, in terms of dangerous thunderstorm alerts, Odisha saw a massive 70 per cent drop

Asani to turn into low pressure, no impact of storm in Odisha anymore: IMD

A thundering number for Odisha. Last year, as many as 250 of the 365 days had been thunderous days. What looks mindboggling is Odisha had recorded over 6.6k cloud-to-ground lightning flashes per day in the year 2020.

As per the US-based Earth Networks' South Asia Lightning report 2020, released on Wednesday, Odisha had received the highest cloud-to-ground lightning flashes last year. A total of 1.65 million lightning flashes were cloud to ground in Odisha in 2020. The State had recorded almost the same count in 2019, which drives home the point that there has been no let-up in lightning intensity over the years.

However, when it comes to total lightning flashes, Tamil Nadu with a total count of over 59 lakh topped the country. But the seeming respite fact for TN is a whopping 52.69 lakh or over 88 per cent of the total lightning count had been cloud-to-cloud. Only around 12 per cent are cloud-to-ground.

Though the Earth Networks' report didn't show any let-up signs as far as the lightning strike intensity is concerned, in terms of dangerous thunderstorm alerts Odisha saw a massive 70 per cent dip. Terming the dangerous alerts as 'severe weather disturbances',  the report noted that when in 2019, the total dangerous alerts were nearly 0.2 per cent of the total cloud-to-ground strikes, the proportion in 2020 had dropped to 0.05 per cent. As a consequence, Odisha slipped to 4th place in the country. 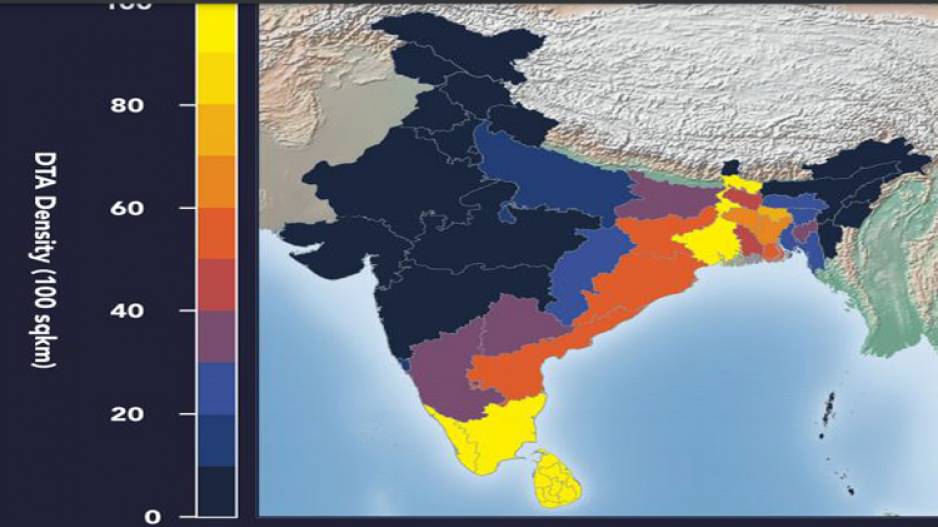 As per the report, Odisha had recorded 50-60 dangerous thunderstorm alerts per 100 square km area in 2020. And nearly 90 per cent of the alerts were issued by Earth Networks during the four-month period of April, May, June and September.

What Are Dangerous Alerts?

The lightning strikes that is followed by loud thunder are termed in weather parlance as dangerous thunderstorm alerts, explained a report of the Earth network. Though such cloud-to-ground loud thunder-lightning are not common, this weather phenomenon is termed as severe weather for the reason that they are stronger and travel larger distances vis-a-vis the normal cloud-to-ground lightning.

Is The Eastern Coast Vulnerable?

A look at the total pulse density map reveals so. Explaining the reason, the report said, " “Nor’westers” develop in the hills of Northeast India and move from the Northwest to the Southeast. They produce severe weather with frequent lightning, hail, very strong wind gusts and heavy rain during the pre-monsoon period. This is the prime reason why the eastern coast has become more vulnerable.

The report also mentioned that since India is susceptible to extreme amounts of heat and moisture for its proximity to the equator and the Indian Ocean, these factors contribute to acute thunderstorm weather during pre-monsoon and also during the end of monsoon season (September).