Odisha has witnessed a cumulative deficit of 6% rainfall during this monsoon season so far, the Regional Meteorological Centre of the IMD informed on Sunday.

Odisha has witnessed a cumulative deficit of 6% rainfall during this monsoon season so far, the Regional Meteorological Centre of the IMD informed on Sunday.

The total average rainfall received in the State during the period from June 1 to June 27 stands at 174.9 mm which is six per cent less than the normal average of 186.1 mm of rain, the Met department informed through its Twitter page.

A total of 10 districts Bolangir, Boudh, Rayagada, Ganjam, Gajapati, Jajpur, Bhadrak, Kandhamal, Mayurbhanj and Keonjhar have recorded deficit rainfall between 20% to 59% less than the long term average during the period till June 27.

Similarly, the amount of rainfall stands between 20% and 59% excess of the normal in as many as 7 districts namely Sundargarh, Jharsuguda, Puri, Cuttack, Jagatsingpur, Kendrapara and Koraput. 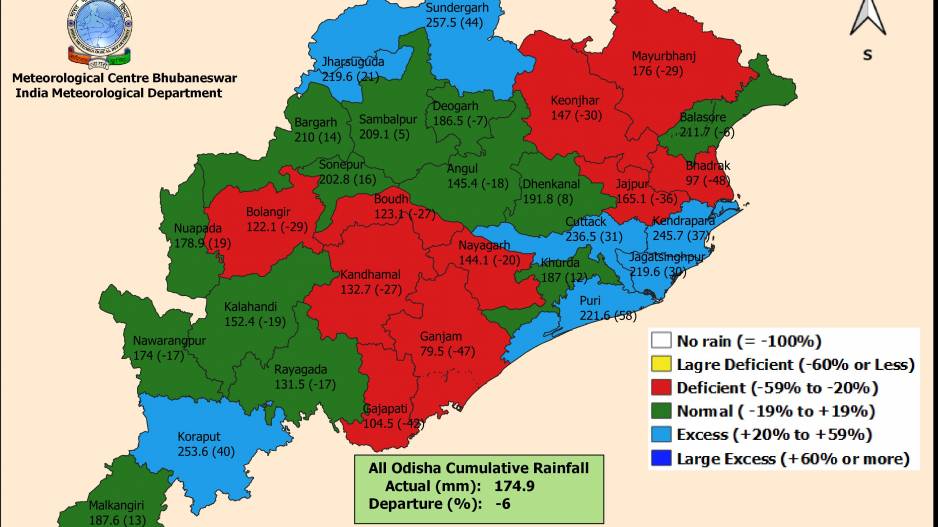 While Sundargarh has recorded 257.5 mm of rain, the maximum among all districts in the State since the onset of the Monsoon season in the country. However at 221.6 mm of rain, Puri has the highest departure of excess rainfall at 58% above the normal average.

The weather department has forecast heavy rainfall in several parts of the State in the next few days.