The total number of deficient rainfall districts stood at 24. The July prediction paints no rosy Monsoon dreams. A low pressure near Andhra Pradesh Coast will bring some rain for Odisha on July 14-15. Forecasts show no excess rainfall in State in July

The predictions of above normal rainfall in Odisha in June has gone haywire. The State has wrapped up the month with a deficient rainfall of around 17 per cent, though as per IMD parlance, a deficit rain of around 19 per cent is considered normal.

Along with IMD, another weather agency of repute APEC Climate Centre has predicted above normal rainfall in the State in the month of June. But the actual rainfall during the month has turned the forecasts turtle.

No rain luck for majority of the south coastal Odisha. As per IMD Bhubaneswar categorisation, the districts of Nayagarh, Khordha, Puri, Ganjam and Gajapati belong to south coastal Odisha. Except Puri and Khordha, where the rainfall have been in excess of 46 per cent and 1 per cent, respectively, the rest of districts have landed into deficit zone. When the highest deficient rainfall of 51 per cent has been measured in Ganjam, the deficit amount in Gajapati is 46 per cent and Nayagarh (28 per cent).

As many as five districts in south interior Odisha have also recorded deficient rainfall in the range of 39-26 per cent. Balangir recorded a deficient rainfall of 39 per cent, whereas Rayagada measured a deficit of 26 per cent. The other districts are: Boudh (38%) Kandhamal (37%), Nuapada (29%), Kalahandi (28%) and Rayagada (26%). Only Nuapada district has received normal rainfall.

(See the Pattern below) 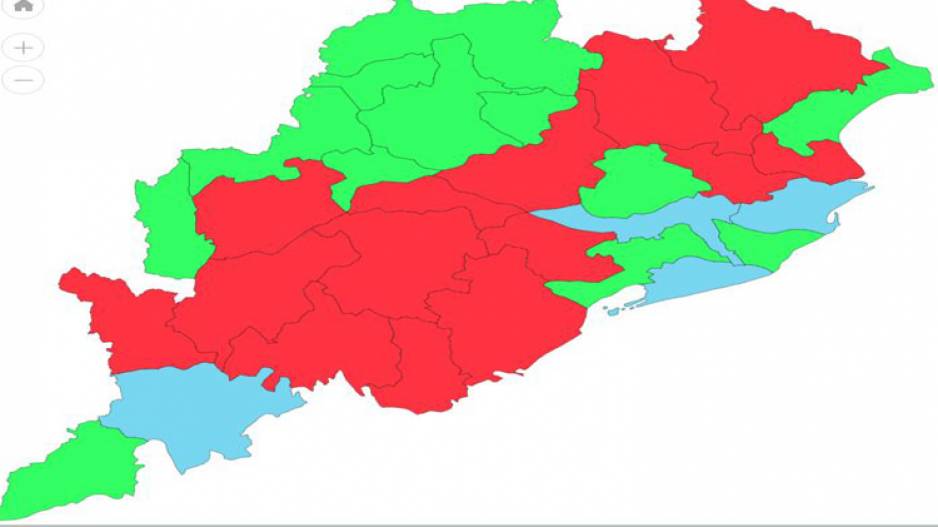 As per model forecasts, the State is unlikely to witness any significant rainfall till July 3. Rainfall activities will pick momentum, especially in coastal Odisha, due to activation of a monsoon trough on and around July 4. However, predictions show widespread rainfall across the State on July 7 and 8.

There has been no forecast of any significant rainfall across the State after June 10. A glance at the IITM-IMD-ERPAS Rainfall Anomaly Forecast shows that Odisha is predicted to record a deficit rainfall in the week of July 8-14.

On July 14, the districts in south interior Odisha will be going to witness a good rainfall owing to the weather system, whereas rest of the districts are predicted to receive rainfall on July 15.

In the third week of July (15-21), rainfall in the north interior and some north coastal districts will slip into the deficit zone, the IITM-IMD model forecast suggests.