The suspense is over. The region’s top cyclone forecaster has released the track chart of Cyclone Jawad tonight.

As per the IMD track forecast, the cyclonic system after moving northwestwards, will reach West-Central Bay of Bengal off north Andhra Pradesh - south Odisha coasts around December 4 morning. Thereafter it will take a north-northeastwards curve along the coastline of Odisha.

Prior to the IMD forecast, Odishatv.in quoting the model forecast of INCOIS and NCEP had predicted cyclone Jawad taking a northeast turn from the coast of North Andhra Pradesh.

Though IMD has not predicted the landfall place, its forecast bears a lot of agreement with the forecasts made by INCOIS and NCEP.

The maximum sustained surface wind speed is 25 knots gusting to 35 knots. The estimated central pressure is about 1004 hpa. Sea condition is rough to very rough over southeast Bay of Bengal. A buoy near 10.5n/94.2e reported mean sea level pressure of 1009.8 hpa and maximum sustained wind speed of 800 /10 kts.

As per the IMD bulletin, most of the weather forecasting models are indicating that the current Depression over SE BoB would intensify into a Cyclonic storm on 3rd December. However, there is some divergence among various models w.r.t. track of this system. 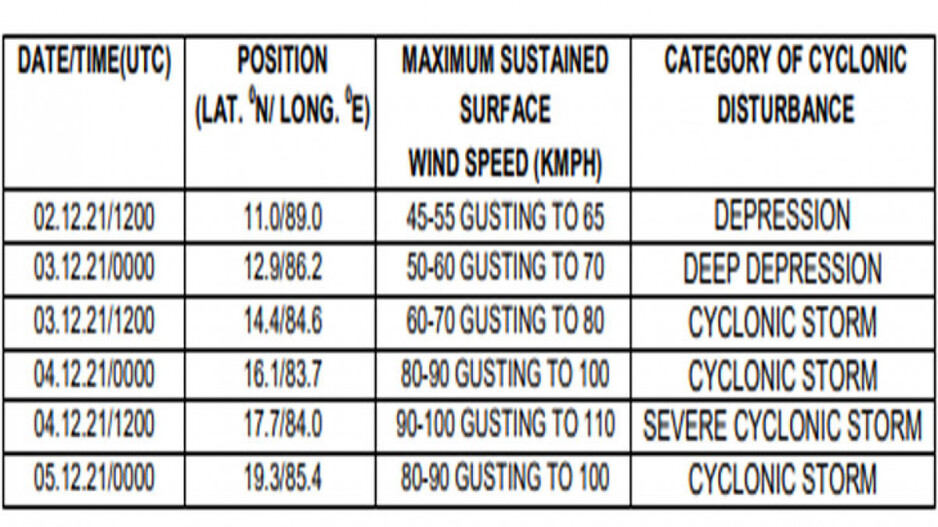 Track and intensity of cyclone Jawad

Models including IMD, GFS, IMD MME, NCEP GFS, NCUM and NEPS are indicating the system to move west-northwestwards initially, with gradual change in movement to northwest/north-northwest till 4th evening (1200 UTC). Thereafter, the system will re-curve north-northeastwards. However, ECMWF deterministic & ensemble models and GEFS are indicating that the system would cross north Andhra Pradesh-south Odisha coastline in the late night of 4th December, the IMD has said.

The genesis potential parameter (GPP) of IMD is also indicating potential zone of cyclogenesis during 2nd to 5th over westcentral and northwest bob. Though all these models are in agreement with the potential genesis and intensification over the bob, still, there is large uncertainty with respect to likely movement point and time of recurvature and hence the landfall point & time.