A last-minute attack by his opponent Myles Amine of San Marino left India's Deepak Punia heartbroken as he lost the close bout, missing out on a bronze medal in the men's 86 kg freestyle at the Tokyo Olympics wrestling competition on Thursday.

Punia, who had lost to USA's David Taylor in the semifinals on Wednesday, had a one-point lead going into the last minute of the bout but let it slip as he came under attack and lost the bout 4-2. Having expended all his energy in keeping Amine at bay, Punia looked exhausted and could not defend well as the San Marino grappler launched a desperate attack in the final seconds.

Punia's coach raised an objection over the three points awarded against his ward but the table officials, after watching the action on a monitor, ruled in favour of his opponent.

Golf: Aditi In Medal Hunt In Tokyo Olympics With Blemish-Free Second Round

Tokyo Olympics: ‘They Did What We Couldn’t,’ Dilip Tirkey On India Men's Hockey Bronze Triumph

Punia, a world junior champion and a silver medallist in the senior World Championships in 2019, tried his best against Amine as both grapplers tried for a breakthrough in the first part of the bout. He managed a two-point takedown and though Amine reduced the margin by one point soon after, the Indian did not get any further chances. He was cautioned by the referee for not trying enough and though Punia avoided any action by being more proactive in defense, he could not unleash any attacks in the last part of the bout.

His rival however managed to bring him down with a quick ankle lock in the final minutes and claimed three points that ended Punia's hopes.

Vinesh was knocked out 3-9 by Vanesa Kaladzinskaya of Belarus at the Makuhari Messe Hall on Thursday morning.

The Haryana grappler looked off-colour during the last-eight clash against the Belarusian wrestler. She struggled to break Kaladzinskaya's solid defense. The loss, however, was not end of medal hope as repechage remained a possibility.

However, Kaladzinskaya then lost to China's Pang Qianyu in the semifinal, ending Vinesh's Tokyo Olympics campaign. 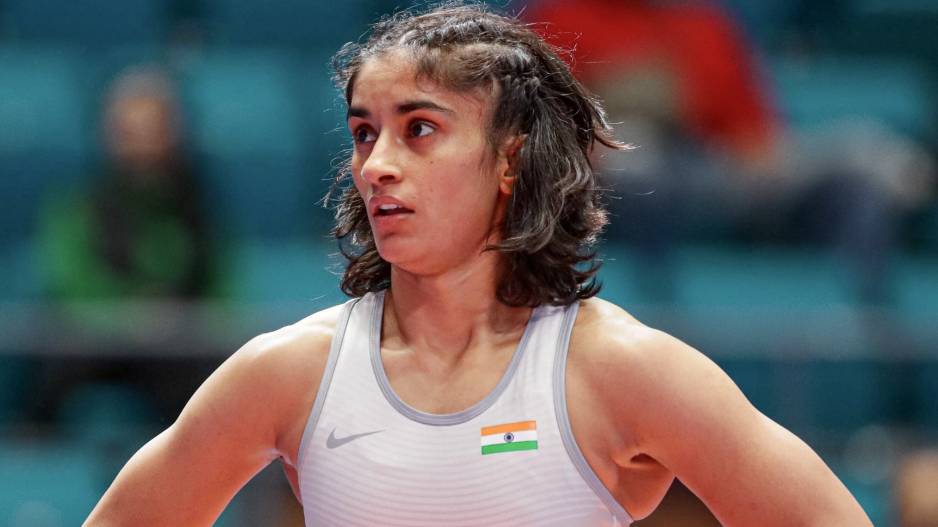 Disheartened with the news, Rio Olympics bronze medallist Sakshi told IANS: "I couldn't hold back my tears. I just saw the semifinal match and I can't tell you how I am feeling right now. This is our bad day in wrestling. In Rio, Vinesh got injured and she was so hurt at that time. But she then made a strong comeback and worked really hard for Tokyo Olympics. I can't imagine how she would be feeling right now.

"She was our strong contender. We are still unable to believe that she has lost. This is really a very bad day of my life. I will speak to Vinesh now," said an emotional Sakshi.

Vinesh had started her campaign on a strong note, winning her opening bout 7-1 against Sweden's Sofia Magdalena Mattsson, the 2016 Rio Olympics bronze medallist.